Paul Robeson – “A Symbol of Freedom and Human Dignity”

Posted on February 26, 2017 by Christopher George

Paul Robeson
and
His Life
Robeson is a college man – a graduate of Rutgers and Columbia Universities, with degrees from both institutions. He is athlete – scholar – actor – singer, and outstanding in these fields.
He was born in Princeton, N.J., on April 9, 1898. His father, born in slavery, was a minister – his mother, a school-teacher. The family moved some years later to Somerville (N.J.), where Robeson [1898-1976] went to school and sang in the choir of his father’s church. Even before he entered Rutgers, he had made a reputation for himself as a debater. One day, two Rutgers professors, acting as judges in a high school debate in which Robeson took part, were impressed by his sincerity and powerful, moving voice. They asked him later if he had thought of college, and encouraged him to enter Rutgers.
Robeson did so with the idea of following in his father’s footsteps and becoming a preacher. But his prowess at football was such as to make him All End man for two seasons. After winning his degree in Rutgers he played for two seasons in professional football. Then he decided to take a post-graduate degree in law at Columbia. He completed the three year course at Columbia University and took his degree. At the time of graduation he appeared in a play in a nearby Y.M.C.A. The rising Eugene O’Neill, playwright, Kenneth McGowan, producer, and Robert E Jones, scenic director happened to be in the audience. They were vividly impressed with the young negro’s talent, and Mr. O’Neill went back stage and asked Robeson to appear in his “Emperor Jones”. Robeson laughed at the idea, but O’Neill insisted. 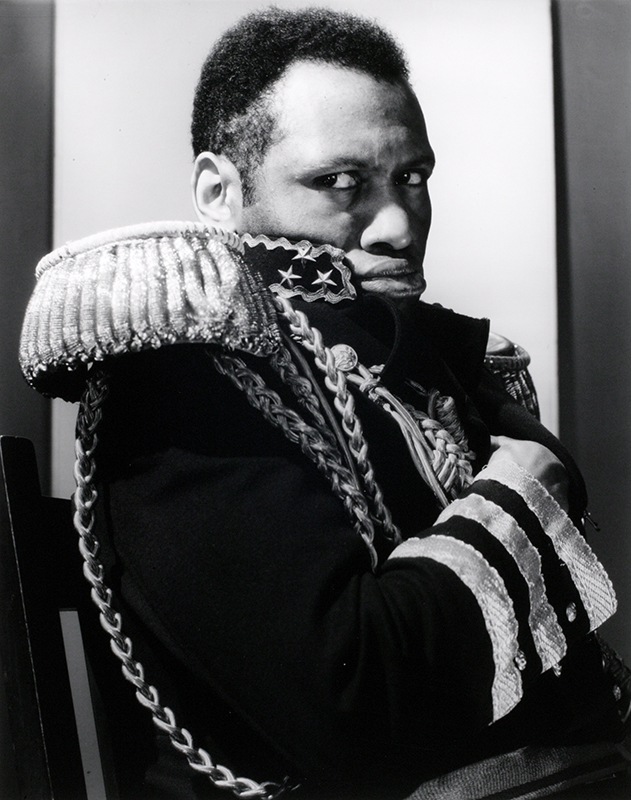 Robeson was finally persuaded to try for the part. To his astonishment he found himself taking the final curtain to a widely cheering audience, first of many he was to know in his exciting career. There was now no resisting the tide which carried him on to other stage triumphs, “All God’s Chillun,” “Black Boy”, “Porgy” and eventually his unforgettable appearance in “Show Boat.” He definitely abandoned all thought of a law career. His phenomenal success lay not alone in his dramatic gifts but in the marvelous quality of his speaking voice.
He had always loved to sing but it had never occurred to him to consider the concert stage until he was induced to give a recital of Negro spirituals in New York. The emotional splendor of his resonant bass-baritone held spellbound the throng that had come to hear him. For his next concert a long line waited in snowstorm, only to find the house sold-out. Soon after, he went abroad and sensational reports of music successes drifted back from London, Paris, Berlin, Vienna, Prague and Budapest.

His return to America was in the nature of a triumphal entry. He was now a world-famed singer and his own native land was waiting to acclaim him. From coast to coast he toured, thrilling the ear and the soul through the medium of his great voice.
Back to Europe again for long concert tours and a career in motion pictures, topped by the film version of “Emperor Jones”, Robeson remained away for four years during which time Americans missed his concerts and the emotion-charged beauty of his singing. Not to have heard Robeson sing “Deep River” and “Water Boy” is to have missed an exalted experience. 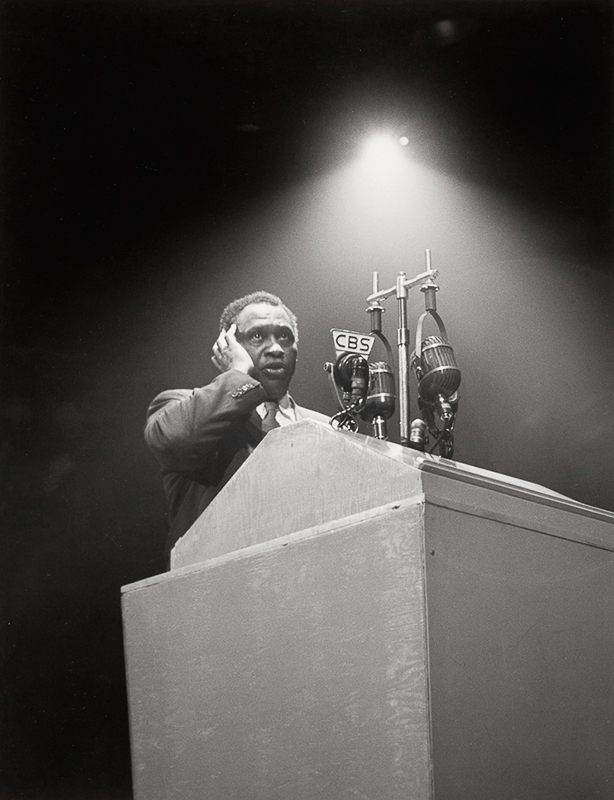 His return to this country in 1940 was signalized by one of the most exciting radio adventures of the season, the first performance of Earl Robinson’s folk-oratorio “Ballad for Americans“, a work whose freshness of spirit and novelty of style opened up an entirely new concept of American music. It was introduced at the premiere of the Columbia Broadcasting System’s new “Pursuit of Happiness” program and has since been released in stirring recordings.

Paul Robeson has played since then the part of Othello in the Margaret Webster Production of the tragedy by William Shakespeare. His London and New York success in that great tragedy was repeated in every city where it was shown last season. Montreal won’t forget his interpretation of the Moor with the outstanding Iago of Jose Ferrer. Back to the concert stage Paul Robeson will return to his regular public everywhere in Canada and in the United States.

More information about the life of Paul Robeson:
Interview with Paul Robeson at KPFA in 1958, from archive.org
“Listen to Rare, Beautiful Music from the Robeson Archives” – from wnyc.org