“The New Generation Offers a Leader” 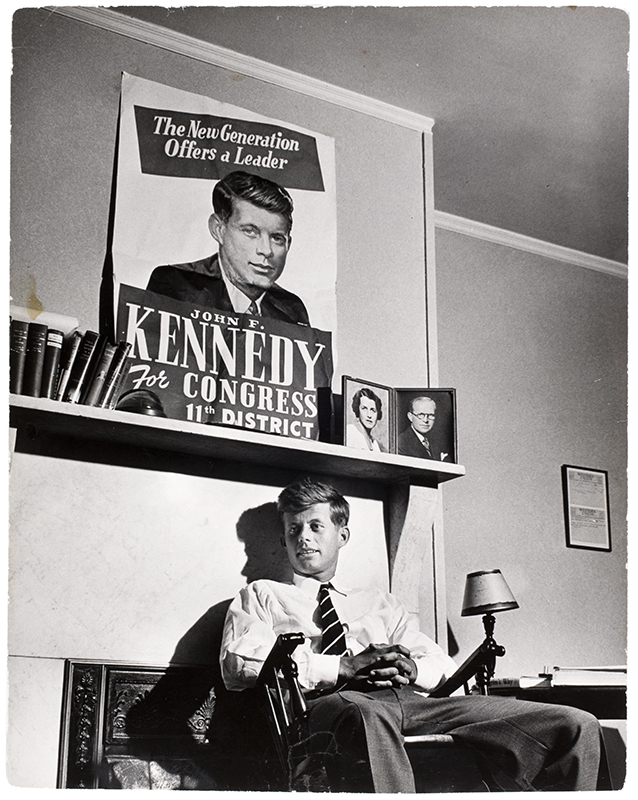 Yale Joel, [Candidate for Congress, John F. Kennedy, 29, sitting under campaign poster, next to photos of his parents in a room at the Bellevue Hotel during his campaign for MA-Rep for the 11th district], 1946 (1924.2005)

JOHN F. KENNEDY. The 29-year-old son of Joseph P. Kennedy, former U.S. Ambassador to Britain, this month campaigned hotly in Massachusetts’ 11th District, where he is Democratic candidate for Congress and where 50 years ago, his grandfather was a representative. He won nomination last June in a slam-bang fight. A PT-boat skipper during the war, ex-Lieutenant Kennedy was shipwrecked on a Pacific island, won Navy and Marine Corps Medal.
Life, September 30, 1946, p. 40

To celebrate the circus (sometimes scary, sometimes funny) and the gravitas of the current Presidential elections here in America, this is one of a series of blog posts (not in a logical, chronological or alphabetical order) of photographs, made by a variety of photographers – from famous to forgotten, that document the campaigns of politicians and the protests against political leadership around the world. Elections 2016.

2 Responses to “The New Generation Offers a Leader”