Posted on November 19, 2014 by Christopher George 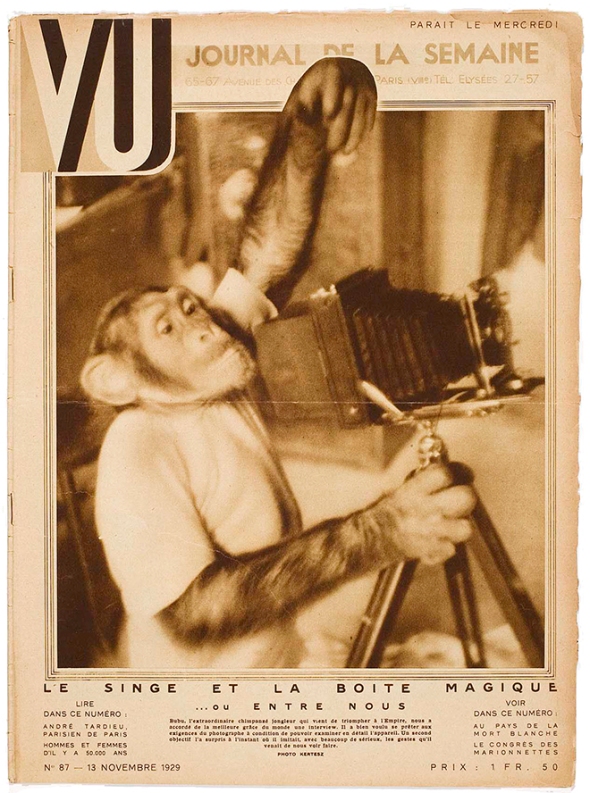 With all the hoopla surrounding monkey selfies, let’s not forget that long before “a female Celebes crested macaque (Macaca nigra)” borrowed David Slater’s camera in North Sulawesi, Indonesia and started shooting, there have been monkeys behind the camera for many years. The cover of this Vu magazine, from 1929, featured a photograph by André Kertész of his colleague Bubu, who was not only an extraordinary juggler and performer, but a very prominent and accomplished French portraitist, pointillist, Dadaist, Surrealist, Futurist, optimist, pacifist, atheist, environmentalist, activist, absurdist, accordionist, acupuncturist, alarmist, alchemist, animist, archivist, balloonist, bio-ethicist, botanist, cartoonist, cellist, climatologist, colorist, constructivist, feminist, etc., etc. He photographed Babar and was better than Nadar. In fact, there’s a rumor that Bubu was an assistant of Eugène Atget. And when Eugène was under the weather, he would send Bubu in his place, many of Atget’s famous photos might have been made by a monkey! (There’s another great photo of Bubu on juggle.org, the official publication of the International Jugglers’ Association: “The most famous of all ‘juggling’ animals was Bubu, the incredible performing chimpanzee of the 1920’s and 30’s.” That page on eJuggle can be found here.) 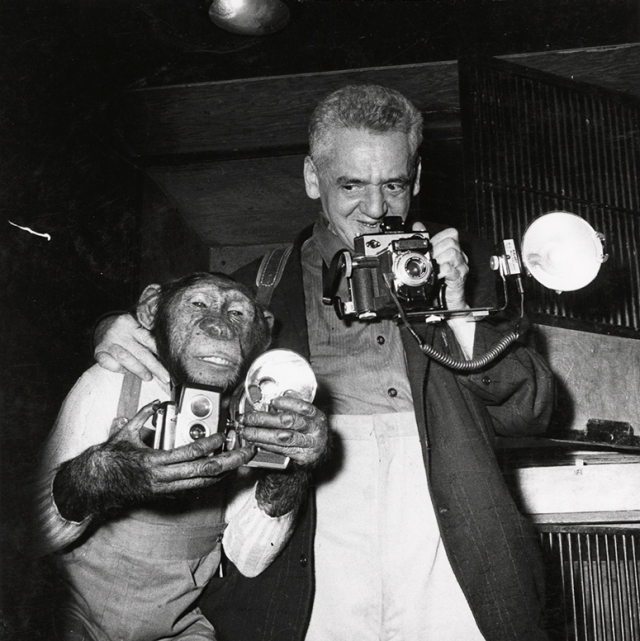 Hypo was Weegee’s assistant in the 1950s and 60s, (although some bloggers believe that the chimp was was behind the lens when “The Critic” was made). Hypo did much of Weegee’s printing from the mid 1950s to late 60s. Weegee would give Hypo some negatives and a bunch of bananas and let him, well, go bananas in the dark room. This is the principle reason Weegee made so many “distortions” during this period. The “distortions” were made by a chimpanzee!

(Nonja, an orangutan, is also a very skilled shutterbug. Her facebook timeline is here.)

According to the OED, “Orangutan” comes from the Malay term “orang huan,” which means “forest person.”

With all the monkey selfie brouhaha let’s not forget about Bubu and Hypo… Our closest ancestors have been photographing (what is a photograph but a two dimensional aping of “reality”) for many years, and as photography has evolved, so have our simian shutterbugs…

The world’s first film shot entirely by chimpanzees is to be broadcast by the BBC as part of a natural history documentary.
The apes created the movie using a specially designed chimp-proof camera given to them by primatologists.
The film-making exercise is part of a scientific study into how chimpanzees perceive the world and each other…
Making the movie was the brainchild of primatologist Ms Betsy Herrelko, who is studying for a PhD in primate behaviour at the University of Stirling, UK.
Over 18 months, she introduced video technology to a group of 11 chimpanzees living in a newly built enclosure at Edinburgh Zoo, UK.
The enclosure, which contains three large interlinked outdoor arenas, as well as a series of smaller rooms in which the apes can be studied by researchers, is the largest of its kind in the world.
Despite the fact that the chimps had never taken part in a research project before, they soon displayed an interest in film-making.

More information about the Chimpcam research (and the presently unidentified primate photography artists) is here.

Although this post is a bit silly, the situation of orangutans and the plight of many primates, is very serious. Sumatran orangutans are currently “critically endangered” with less than 7,000 in the wild treetops of Sumatra. And the number of Bornean orangutans in the wild treetops of Borneo are decreasing rapidly, the population is now less than 55,000. (Philadelphia Zoo.) Interestingly, “Conservation drones,” small, inexpensive aerial vehicles with cameras are being used to monitor and collect data on wildlife areas. (ConservationDrones.org) (Google maps of conservation drone projects.)