Posted on April 17, 2014 by fansinaflashbulb 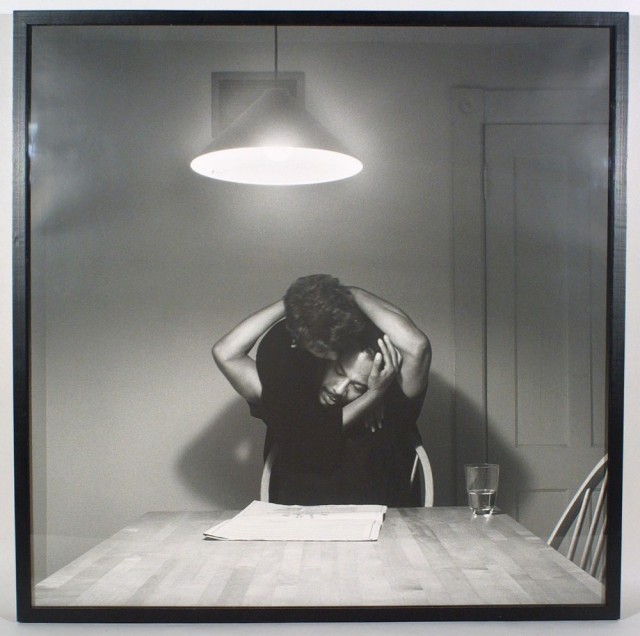 Carrie Mae Weems tells stories in her photographs, often becoming her own subject. She uses her work to explore cultural, social, and political issues, particularly those dealing with representation of women and African Americans, and comments on race, sex, and gender.

In this series, Weems portrays many different domestic scenes all centered around the kitchen table with herself as the one continuous subject throughout all of the images. This selection of works focuses on family, domestic space, and the urban landscape. It brings together photographs from various traditions like conceptualism, still life, and social documentary.

These works ask us to think critically about the role played by the artist, particularly the photographer, in the creation and shaping of a narrative to tell the stories that have been ignored, forgotten, or erased.

This square black-and-white photograph from Carrie Mae Weems’s Kitchen Table Series takes the form of a couple embracing each other over a kitchen table; a sweet and simple moment between two people that inhabit this modern domestic scene. A beautiful geometric composition jumps between squares and circles: wooden table, newspaper, door, frame, glass of water, chair . . . and then back to the center of the image. With a spotlight on both subjects, we become witnesses of this fleeting moment of love that quickly becomes much more than just that. Looking at the shape of the two bodies together and their dark shadow behind, we confirm that here lies a more substantial theme of balances of power within sexual and romantic relationships, as their bodies intertwine and mold into one.

This entry was posted in Fans in a Flashbulb and tagged Carrie Mae Weems, ICP-Bard. Bookmark the permalink.