“In just 27 minutes you can be eating SNOW MAN STEW”

Posted on April 9, 2020 by Christopher George

Life’s Cover
When the chairman of the Joint Chiefs of Staff, General of the Army Omar Nelson Bradley, was asked to wear his old, four-star European battle jacket for this week’s cover portrait, a problem arose. No sentimentalist, Bradley had stashed the jacket away and nobody knew where it was. It finally turned up in the attic of his Fort Meyer home. The general’s four-star helmet was borrowed from the Bradley museum in his hometown, Moberly, Mo… Life, April 9, 1951, p. 27

Blueprints have long been the tool of architects and engineers who cover them with precise plans and cross sections. Recently two young painters. Bob and Sue Rauschenberg of New York, decided to put them to a more fanciful use. Spreading strips of blueprint paper on the floor, they decked it with leaves, ferns and other oddments salvaged from a florist shop and asked a model friend to come and pose for them. As she lay nude on the paper, Bob moved slowly around her with a sunlamp, exposing the uncovered areas of the blueprint. At the end of 20 minutes he had produced the decorative image on the opposite page. Although the Rauschenbergs make blueprints for fun, they hope to turn them into screen and wallpaper designs. Life, April 9, 1951, pp. 22-24

Underwater Nymph floating in a haze of sea flowers adorns the blueprint after it has been developed. The paper is dark blue where it was exposed to the direct light of the sun lamp. Cloudy areas are sections which were only partially exposed. In the right center is Bob’s foot, which got into the composition by accident.

Exposing blueprint, Bob holds sun lamp over section of paper for two minutes. In actual sunlight, time of exposure is much shorter.

Developing, Bob washes strip under the shower, plasters it on bathroom wall and sponges it with peroxide solution to fix the image.

Surreal Dancer was made by Sue as Bob lay on paper in his jeans. She used string for head, shell for mouth, broken glass for eyes.

Still Life was concocted from fish net, strips of glass, keys, grass, leash, doily. Blueprints are cheap to make. Ten-yard roll and of paper costs around $1.75.

Focusing on tufts of grass, Bob exposes paper till it turns white under lamp light. Developing turns it blue. Ordinary light bulb has no effect on blueprint.

It Lives in Ancient Poverty and Faith

The village of Deleitosa, a place of about 2,300 peasant people, sits on the high, dry, western Spanish tableland called Estremadura, about halfway between Madrid and the border of Portugal. Its name means “delightful,” which it no longer is, and its origins are obscure, though they may go back a thousand years to Spain’s Moorish period. In any event it is very old and LIFE Photographer Eugene Smith, wandering off the main road into the village, found that its ways had advanced little since medieval times.

Many Deleitosans have never seen a railroad because the nearest one is 25 miles away. The Madrid-Sevilla highway passes Deleitosa seven miles to the north so almost the only automobiles it sees are a dilapidated sedan and an old station wagon, for hire at prices few villagers can afford. Mail comes in by burro. The nearest telephone is 12 1/2 miles away in another town. Deleitosa’s water system still consists of the sort of aqueducts and open wells from which villagers have drawn their water for centuries. Except for the local doctor’s portable tin bathtub there is no trace of any modern sanitation, and the streets smell strongly of the villagers’ donkeys and pigs.

There are few signs of the encroachment of the 20th Century in Deleitosa. In the city hall, which is run by political subordinates of the provincial governor, one typewriter clatters. A handful of villagers, including the mayor, own their own small radio sets. About half of the 800 homes of the village are dimly lighted after dark by weak electric bulbs which dangle from ancient ceilings. And a small movie theater, which shows some American films, sits among the sprinkling of little shops near the main square. But the village scene is dominated now as always by the high, brown structure of the 16th Century church, the center of society in Catholic Deleitosa. And the lives of the villagers are dominated as always by the bare and brutal problems of subsistence. For Deleitosa, barren of history, unfavored by nature, reduced by wars, lives in poverty – a poverty shared by nearly all and relieved only by seasonal work of the soil, and the faith that sustains most Deleitosans from the hour of First Communion (opposite page) until the simple funeral (pp. 128, 129) that marks one’s end. 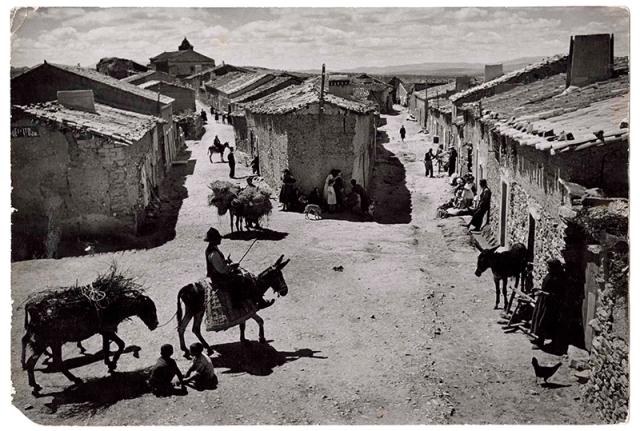 SPANISH VILLAGE: On the Outskirts – At midmorning the sun beats down on clustered stone houses. In the distance is belfry of Deleitosa’s church.

W. Eugene Smith’s pictorial essay “Spanish Village” was published 69 years ago today in Life magazine, April 9, 1951. Included in this blog post are a few pages from Life (almost as appetizers) that caught our eye, like an advertisement for canned stew and powdered biscuits. (After a few weeks of hunkering down at home and sheltering in place “Snowman Stew” looks surprisingly, delightfully tasty.) While wandering off the mainstream road of Life we were pleasantly surprised to see an account of the sublime pair of artists Robert Rauschenberg and Susan Weil making photograms at home. Presumably the front and backs of almost all of the prints that were used to make W. Eugene Smith’s “Spanish Village” pictorial essay have never before been exhibited or published. Used in Life: “Spanish Village” (part one).