Ritz, a puppy belonging to William Kinsman, was one of the causalities of the two-alarm blaze at 157 W. 74th St. yesterday. Noticing the dog had a broken leg, a fireman wrapped him in a blanket and took him to the street.
PM, February 1, 1944, p. 10 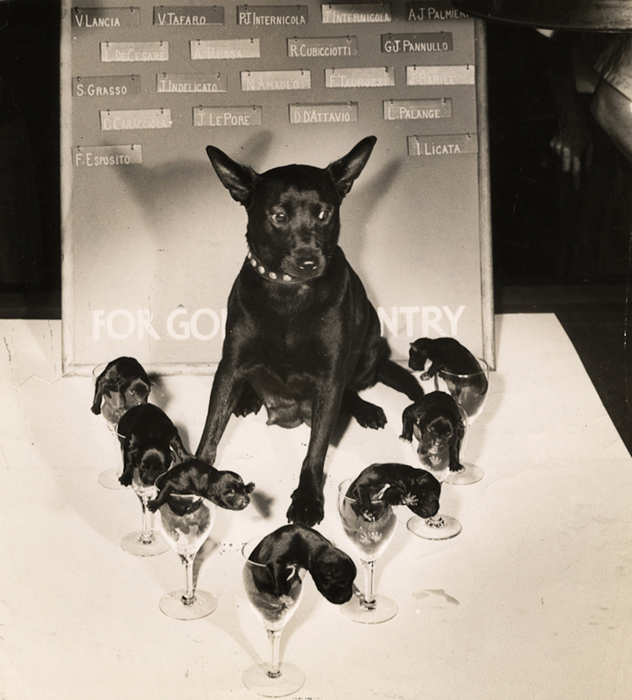 Up at the Dixie Rose A.C. at Broome and Mulberry St., a neighborhood social club in the heart of Little Italy, Dixie Girl gave birth to a litter of seven pups on the pool table. Dixie Girl is, reputedly, a mixture of Belgian police dog and black Spitz. In honor of 32 club members now in service, listed on sign in background, other members have voted to give the pups as mascots to Army camps. “V for Victory” here posed with pups one day old. PM, August 2, 1942, p.5

Buddy is ‘Watered In’
New York — Things got pretty tough for ‘Buddy,’ Bulldog owned by Mrs. De Forest Grant, of 850 Park Ave., this morning, when a water main burst on Madison Ave. between 77th and 78th St., flooded the cellar of Buddy’s house with 9 inches of water, and put the apartment’s four elevators out of commission. Here, Buddy, who can’t get out because the street is flooded, and can’t get up, because the elevators aren’t running, seeks solace among the milk bottles in the apartment house elevator. The residents of the 12-story building who wanted milk on their cereal this morning had to walk to the lobby to get it.” (Typed caption adhered to verso.)

On July 18, 1940, PM published Weegee’s photograph of five kittens and a pair of puppies in glasses on a table in a restaurant in the Lower East Side of Manhattan. At exactly a month old, PM itself was a puppy of a paper. Presumably Weegee made this photo of a clowder and kindle, a clutter of cute kittens, and a pair of puppers on July 17th, only a few days before he made the epochal and monumental “Crowd at Coney Island, Temperature 89 degrees… They Came Early, and Stayed Late” photograph.

So It’s Raining Cats and Dogs in Rivington St., All in One Litter
Talk is cheap, interesting, and comes in several languages on crowded Rivington St., on the lower East Side. Today much of it was about Mary, the cat in Mike Guerrera’s Oriental restaurant at No. 56 (Scungilli, Capozzelle, steaks and chops). The cat Mary was found July 7 with five kittens. Next day she was found with five kittens and two puppies, all nursing. (The pups are fourth and fifth from left, above.) East Siders figure it this way: The cat had kittens and pups; or there’s something funny going on. They keep calling up Ripley. PM, July 18, 1940