“America is my home.”

Posted on December 12, 2019 by Christopher George

New York Has Its First Air-Raid Alarms, But the Enemy Fails to Make Appearance
A million schoolchildren were evacuated from their classrooms yesterday as New York had two air-raid alarms – the first of the war. These pupils at PS 23 on Hester Street looked on the whole procedure as a kind of game. The alarm found most New Yorkers calm, but left them puzzled as to what it was all about. There is one theory that somebody mistook American planes for the enemy; another holds that it was a staged dress rehearsal. The army denied the latter theory. Whatever the cause, we needed the practice. PM Photo by Weegee. PM, December 10, 1941, p.16. 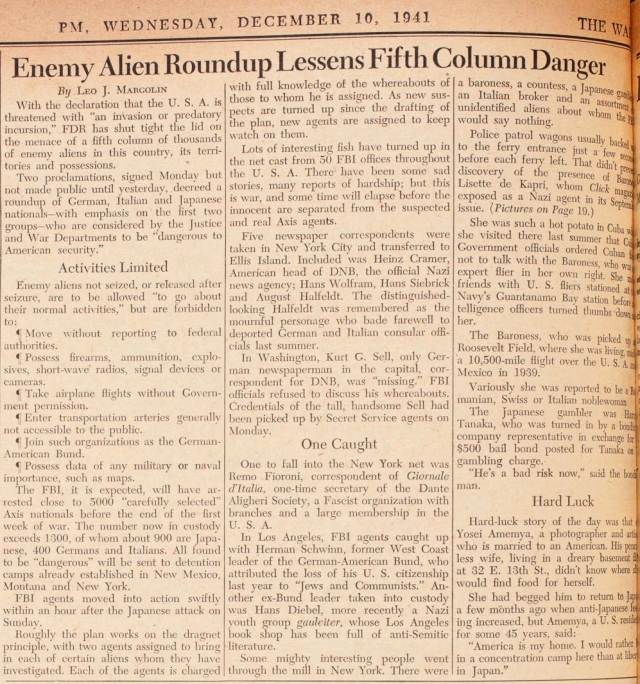 Hard-luck story of the day was that of Yosei Amem[i]ya (1888-1977), a photographer and artist who is married to an American. His penniless wife, living in a dreary basement flat at 32 E. 13th St., didn’t know where she would find food for herself.

She had begged him to return to Japan a few months ago when anti-Japanese feeling increased, but Amem[i]ya, a U.S. resident for some 45 years, said:

All through the day yesterday enemy aliens picked up by the FBI kept arriving at the Barge Office in police vans for transfer to Ellis Island. By yesterday afternoon, the FBI had taken 335 into custody: 200 Japanese, most of whom were arrested Sunday and Monday, and 86 Germans and 49 Italians, almost all picked up late Monday and early yesterday. There were seven prisoners in this particular wagon – one Japanese and the rest Germans and Italians. One of the men rounded up by the FBI was reported to be a Hollywood actor, identity undisclosed. Photo by Morris Gordon, PM.

This is American-born Lt. Ken Asai, an officer of the First Field Artillery, U.S, Army. Lt. Asai is on is way here to the Ellis Island ferry. He has family business at the island. His father, Mota, he said, was picked up by the FBI as a Japanese enemy alien. Photo by Morris Gordon, PM.

‘I Want to Stay Here,’ Wept This Japanese
The most poignant incident in yesterday’s alien roundup was the arrest of James Shutoku Hiramatso, a Japanese restaurant worker, of 12 Nassau St., Brooklyn. The FBI didn’t have to look for Hiramatso. He came voluntarily. Tears in his eyes, Hiramatso told reporters, above, that he has been in the U.S.A. since 1929, that he was married to an American woman, that they had a 2-year-old son. He kept repeating: “I want to stay here.”