“The Last Gateway to Democracy” – Photos by Margaret Bourke-White

Posted on November 14, 2019 by Christopher George 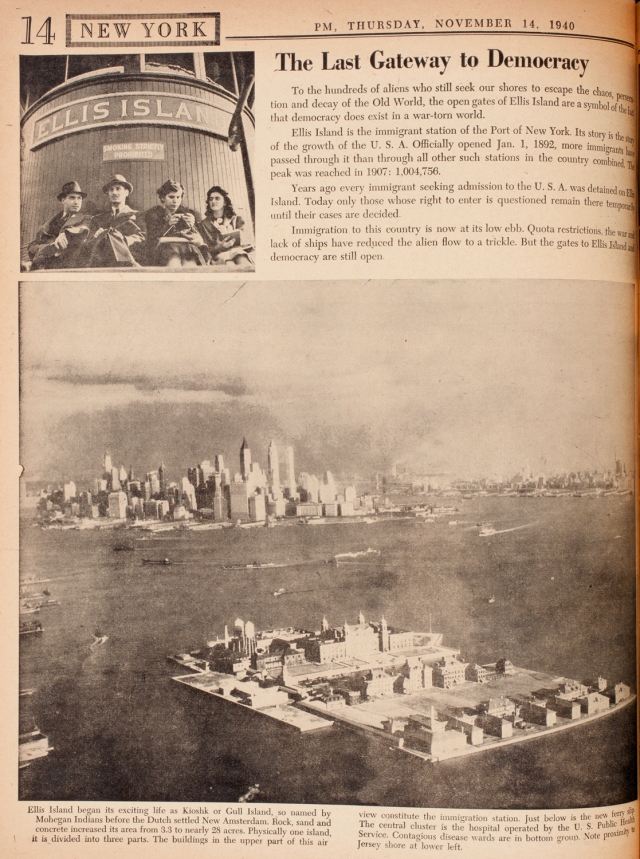 The Last Gateway to Democracy

To the hundreds of aliens who still seek our shores to escape the chaos, persecution and decay of the Old World, the open gates of Ellis Island are a symbol of the fact that democracy does exist in a war-torn world.

Ellis Island is the immigrant station of the Port of New York. Its story is the story of the growth of the U.S.A. Officially opened Jan. 1, 1892, more immigrants have passed through it than through all such stations in the country combined. The peak was reached in 1907: 1,004,756.

Years ago every immigrant seeking admission to the U.S.A. was detained on Ellis Island. Today only those whose right to enter is questioned remain there temporarily until their cases are decided.

Immigration to this country is now at its low ebb. Quota restrictions, the war and lack of ships have reduced the alien flow to a trickle. But the gates to Ellis Island and democracy are still open.

Ellis Island began its exciting life as Kioshk or Gull Island, so named by the Mohegan Indians before the Dutch settled New Amsterdam. Rock, sand and concrete increased its area from 3.3 to nearly 28 acres. Physically one island, it is divided into three parts. The buildings in the upper part of this air view constitute the immigration station. Just below is the new ferry slip. The central cluster is the hospital operated by the U.S. Public Health Service. Contagious disease wards are in the bottom group. Note proximity to Jersey shore at lower left. 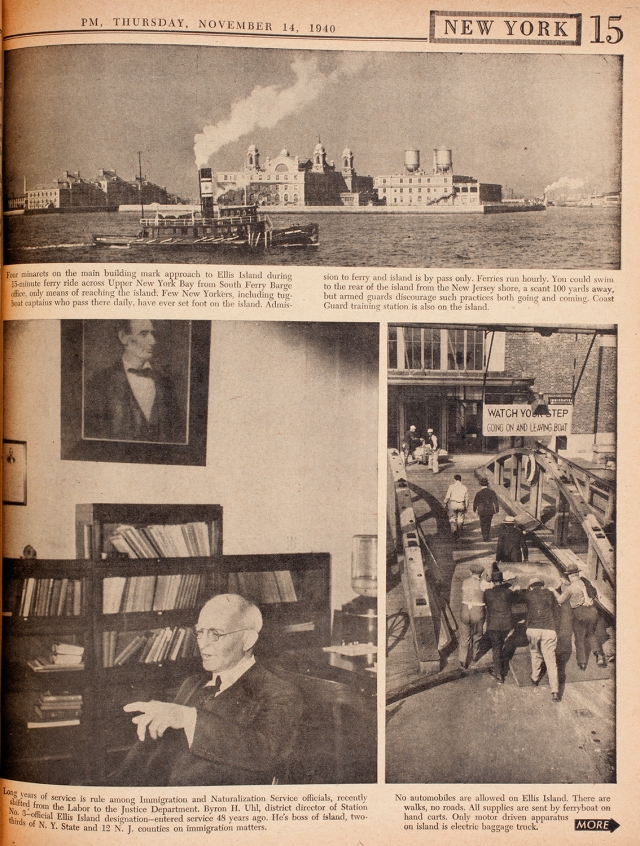 Four minarets on the main building mark approach to Ellis Island during 15-minute ferry ride across Upper New York Bay from South Ferry Barge office, only means of reaching the island. Few New Yorkers, including tugboat captains who pass there daily, have ever set foot on the island. Admission to ferry and island is by pass only. Ferries run hourly. You could swim to the rear of the island from the New Jersey shore, a scant 100 yards away, but armed guards discourage such practices both going and coming. Coast Guard training station is also on the island.

Long years of service is the rule among Immigration and Naturalization Service officials, recently shifted from the Labor to the Justice Department. Bryon H. Uhl, district director of Station No. 3 – official Ellis Island designation – entered service 48 years ago. He’s boss of island, two thirds of N.Y. State and 12 N.J. counties on immigration matters.

No automobiles are allowed on Ellis Island. There are walks, no roads. All Supplies are sent by ferryboat on hand carts. Only motor driven apparatus on island is electric baggage truck. 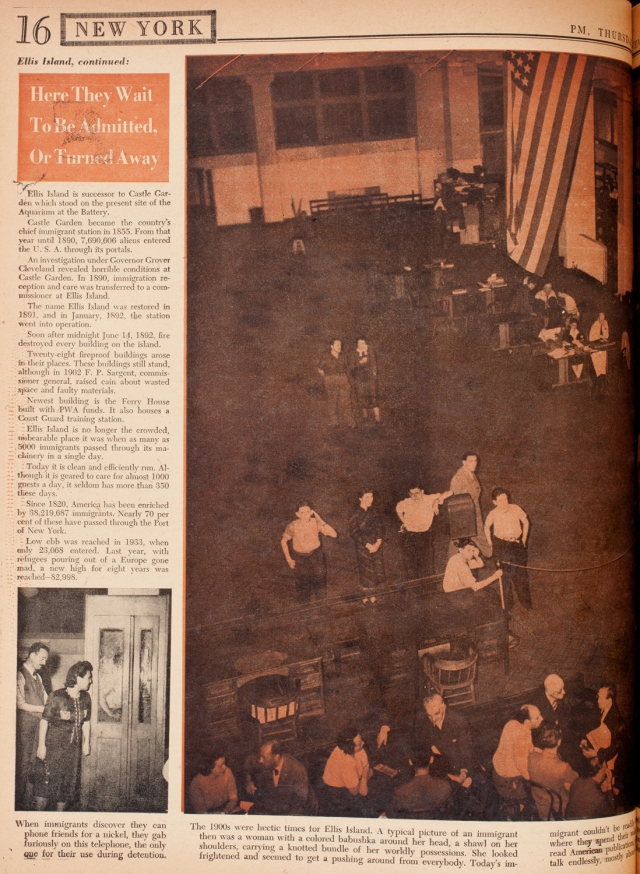 Here They Wait To Be Admitted, Or Turned Away

Ellis Island is successor to Castle Garden which stood on the present site of the Aquarium at the Battery.

An investigation under Governor Grover Cleveland revealed horrible conditions at Castle Garden. In 1890, immigration reception and care was transferred to a commissioner at Ellis Island.

The name Ellis Island was restored in 1891, and in January, 1892, the station went into operation. Soon after midnight June 14, 1892, fire destroyed every building on the island.

Ellis Island is no longer the crowded, unbearable place it was when as many as 5000 immigrants passed through its machinery in a single day.

Today it is clean and efficiently run. Although it is geared to care for almost 1000 guests a day, it seldom has more than 350 these days.

When immigrants discover they can phone friends for a nickel, they gab furiously on this telephone, the only one for their use during detention.

The 1900s were hectic times for Ellis Island. A typical picture of an immigrant then was a woman with a colored babushka around her head, a shawl on her shoulders, carrying a knotted bundle of her worldly possessions. She looked frightened and seemed to get a pushing around from everybody. Today’s immigrant couldn’t be readily distinguished in a crowd. In the reception hall where they spend their their time waiting decision of their cases, they read American publications, play ping pong, bridge, listen to the radio. They talk endlessly, mostly about their troubles. 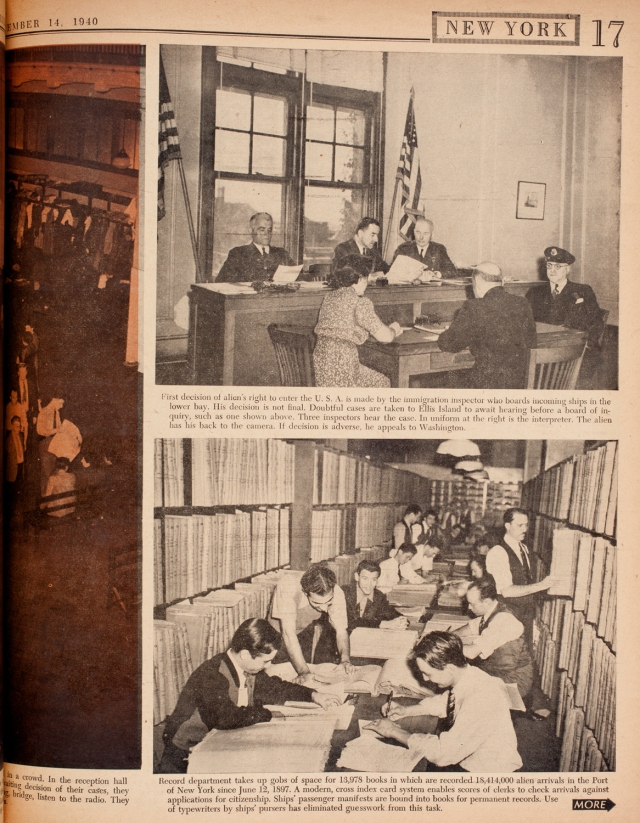 First decision of alien’s right to enter the U.S.A. is made by the immigration inspector who boards incoming ships in the lower bay. His decision is not final. Doubtful cases are taken to Ellis Island to await hearing before a board of inquiry, such as one shown above. Three inspectors hear the case. In uniform at the right is the interpreter. The alien has his back to the camera. If decision is adverse, he appeals to Washington.

Record department takes up gobs of space for 13,978 books in which are recorded 18,414,000 alien arrivals in the Port of New York since June 12, 1897. A modern, cross index card system enables scores of clerks to check arrivals against applications for citizenship. Ships’ manifests are bound into books for permanent records. Use of typewriters by ships’ pursers has eliminated guess work from this task.

This entry was posted in Fans in a Flashbulb and tagged 1940, Ellis Island, immigration, Margaret Bourke-White, New York, PM. Bookmark the permalink.