“This squirrel is perfectly oblivious…”

Posted on October 2, 2019 by Christopher George 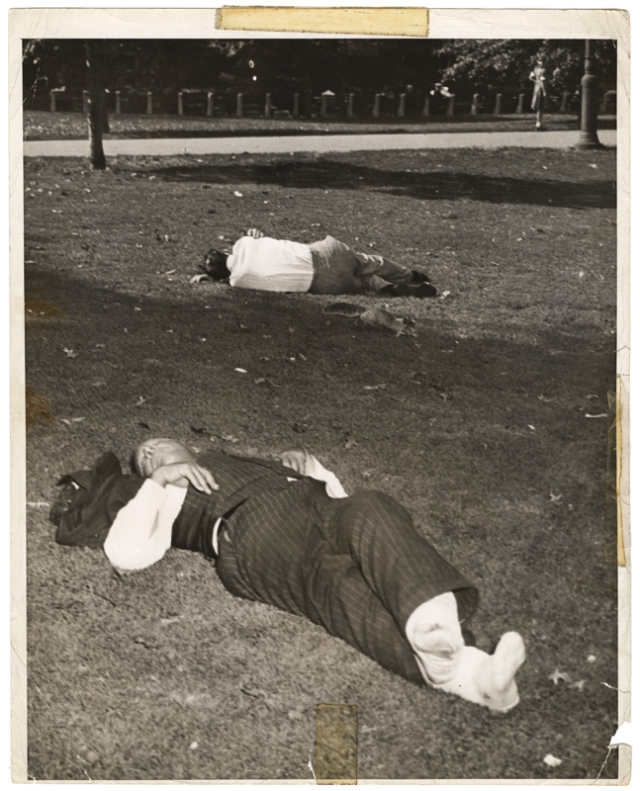 Hoarding for Winter on one of the hottest days of the year, this squirrel is perfectly oblivious to the shoeless sleeper in Battery Park. Weegee, who took this PM photo, said the leaves were falling all over the man, but he slept right on through the chatter of squirrels, the photographer’s flash and the heat. PM, October 6, 1941, p. 14

There are eight million stories in the Naked City… and this is three of them:

On a very hot October day in New York, 78 years ago, Weegee photographed squirrels and sleepers in lower Manhattan. The temperature in Central Park has reached 90 degrees in October only five times since 1868, including October 5th and 6th, 1941. Today might be the sixth.

Mayor Explains It’s Duty When He Goes to Fires

Mayor La Guardia didn’t like the crack made by Park Commissioner Robert Moses in a political speech:

“He takes up room at fires that might better be occupied by a pumper.”

Yesterday at memorial services for 44 firemen who died in the last year the Mayor sandwiched into his speech of condolence an explanation:

This expanding city is thinking of building yet another airport, for training flyers and for military use and, in a more peaceful period, to serve as the first air-freight terminal in the U.S.A. Mayor La Guardia, long a patron of airplanes, tipped his hand on the new proposal yesterday, saying that he and Robert S. Hinckley, Assistant Secretary of Commerce, had tentatively picked 1200 acres in the Idlewild section of Jamaica Bay, Queens, southwest of Laurelton, as the cite.

How this idea will be received by Park Commissioner Robert Moses, who has long fought to make Jamaica Bay and its environs a residential and recreational region, is not known; he was not consulted.
PM, October 6, 1941, p. 14