“The First Woman to Fly the Atlantic Alone”

Although Amelia Earhart was a continuous source of fascination for human-interest journalists, she did not sit for many of the leading photographers of the day. Other than a few portraits by Edward Steichen, the foremost celebrity and fashion photographer on the Condé Nast staff, and mass-market image distributors like Underwood & Underwood, most pictures of Earhart were taken by little-known staff photographers at newspapers or wire services. (2006.18.26) 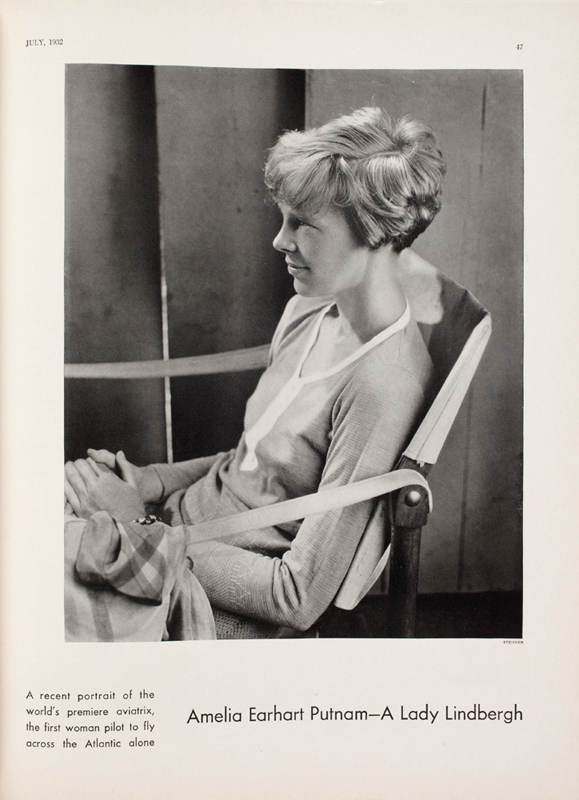 This issue of Vanity Fair appeared in July 1932, shortly after Amelia Earhart returned from her record-breaking flight. (2006.18.41)

After a stop in London, Amelia Earhart continued on to Paris, the original destination of her cross-Atlantic flight. George Palmer Putnam joined her there and accompanied her to Rome for meetings with Mussolini and the pope. Then they traveled to Brussels for lunch with the king and queen of Belgium. 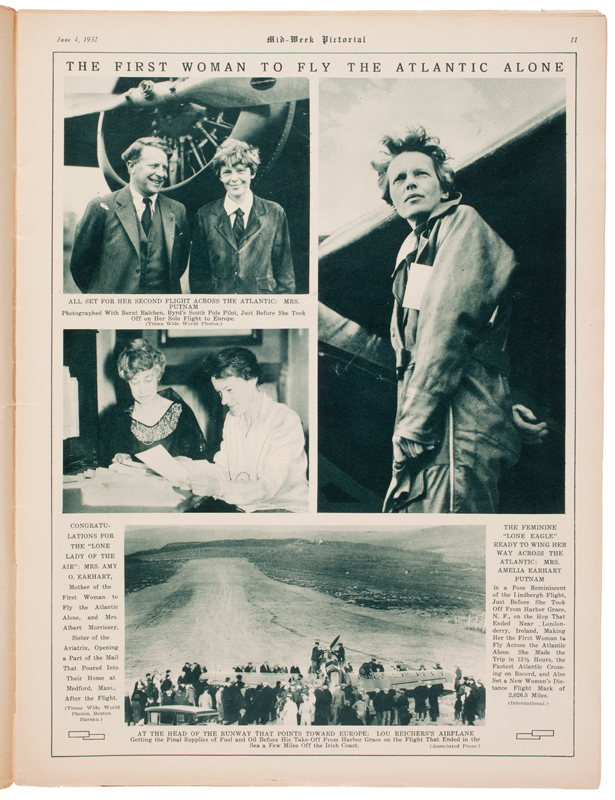 The First Woman to Fly the Atlantic Alone

All Set For Her Second Flight Across The Atlantic: Mrs. Putnam. Photographed with Bernt Balchen, Bryd’s South Pole Pilot, Just Before She Took Off on Her Solo Flight to Europe.

Congratulations for the “Lone Lady of the Air”: Mrs. Amy O. Earhart, Mother of the First Woman to Fly the Atlantic Alone, and Mrs. Albert Morrissey, Sister of the Aviatriz, Opening a Part of the Mail That Poured Into Their Home at Medford, Mass., After the Flight.

The Feminine “Lone Eagle” Ready to Wing Her Way Across the Atlantic: Mrs. Amelia Earhart Putnam in a Pose Reminiscent of the Lindbergh Flight, Just Before She Took Off from Harbor Grace, N.F. on the Hop That Ended Near Londonderry, Ireland, Making Her the First Woman to Fly Across the Atlantic Alone/ She Made the Trip in 13 1/2 Hours, the fastest Atlantic Crossing on Record, and Also Set a New Women’s Distance Flight Mark of 2,026.5 Miles.

“On May 20-21, 1932, Earhart became the first woman—and the only person since Charles Lindbergh—to fly nonstop and alone across the Atlantic. Flying her red Lockheed Vega […] she left Harbor Grace, Newfoundland, Canada, and landed 15 hours later near Londonderry, Northern Ireland.” (airandspace.si.edu.)

The above objects, and more, were included in the ICP exhibition Amelia Earhart: Image and Icon (May 11 – September 9, 2007).