Katharine Hepburn takes off from her native Hartford in gray gabardine trousers, gray flannel coat, white wool scarf. She likes this get-up for flying because it is so comfortable. On cold days she throws a big mink overcoat on top. 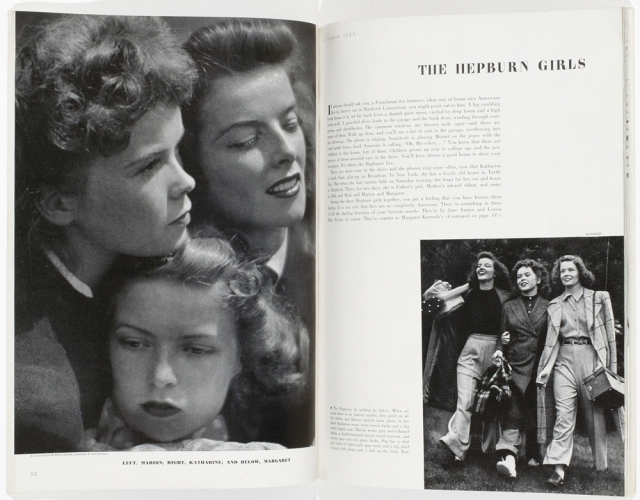 If anyone should ask you, a Frenchman for instance, what sort of house nice Americans live in, there’s one in Hartford, Connecticut, you might point out to him. A big rambling brick house it is, set far back from a shaded quiet street, circled by deep lawns and a high brick wall. A graveled drive leads to the garage and the back door, winding through evergreens and shrubberies. The casement windows are thrown wide open – and there are many of them. Walk up close, and you’ll see a lot of cars in the garage, overflowing into the driveway. The phone is ringing. Somebody is playing Mozart on the piano with the loud pedal down, hard. Someone is calling, “Oh, Mo-o-ther…” You know that there are children in this house, lots of them. Children grown up now to college age and the possession of those assorted cars in the drive. You’ll have chosen a good house to show your foreigner. It’s where the Hepburn’s live.

There are more cars in the drive and thew phones ring more often, now that Katharine is back East, playing on Broadway. In New York, she has a lovely old house in Turtle Bay. But when the last curtain falls on Saturday evening, she leaps for her car and home to Hartford. There, for two days, she is Father’s girl, Mother’s adored eldest, and sister to Bob and Dick and Marion and Margaret.

Seeing the three Hepburn girls together, you get a feeling that you have known them before. it is not only that they are so completely American. There is something in them of all the darling heroines of you favorite novels. They’re by Jane Austen and Louisa May Alcott, of course…

The Hepburns do nothing by halves. When we asked them to be fashion models, they piled on all the clothes and Marion carried extra slacks in her hand. Katharine wears violet tweed slacks and a big tweed raglan coat. Marion wears gray men’s flannel slacks, a double-breasted brown tweed overcoat, and carries gray and red plaid slacks. Peg has a shirt and slacks of lightweight gray wool, and a big plaid topcoat with pleats and a belt in the back. Best.

Miss Katharine Hepburn and Vionnet in an effective collaboration. Bias bands of white satin shape the dress, and rhinestone buttons are a flash of light down the tightly fitted bodice. At Hattie Carnegie. Martha Weathered, Chicago, I. Magnin, California. (No, the crocheted wool shawl is not Vionnet’s idea, but Miss Hepburn’s own.)

“Katharine is back East, playing on Broadway.” In 1939 Hepburn was starring in The Philadelphia Story, (1939, written by Phillip Barry). A year later it was turned into a movie, directed by George Cukor, and starring Katherine Hepburn, Cary Grant, and James Stewart.

“In New York, she has a lovely old house in Turtle Bay.” For many years Katharine Hepburn lived on East 49th St., in Manhattan. This weekend there’s an annual birthday party for her on the Dag Hammarskjold Plaza, East 47th St., near the U.N. and the wonderful Katharine Hepburn Garden.