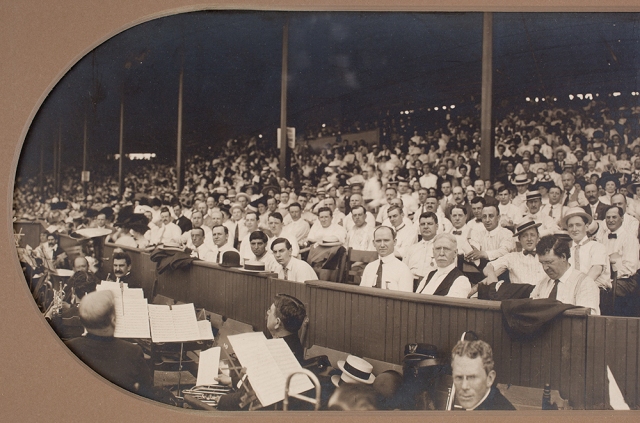 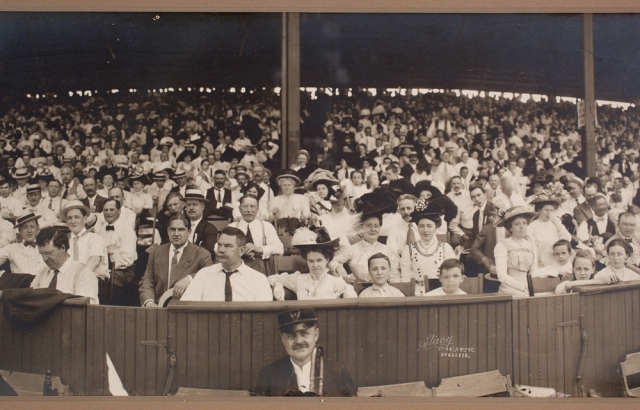 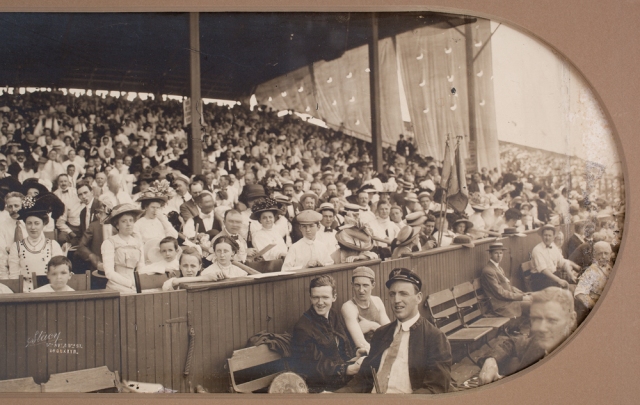 To celebrate the opening of Ebbets Field in 1913 there were three openings: an exhibition game against the Yankees (Highlanders) on April 5th, a “special” season opener against Philadelphia on April 9th, a day before the season was to officially open (apparently the unseasonably cold weather limited attendance), and there was a “regular opening” against Philadelphia on Friday, April 18, 1913, at 3:30 PM.

The musical group in the foreground of Charles E. Stacy’s (5th Ave. and 9th St.) wonderful panoramic photo is Shannon’s 23d Regiment Band. In October 1912, to commemorate the last game played at Washington Park, between the New York Giants and the Brooklyn Dodgers (also known as Superbas and Robins), Shannon’s 23d Regiment Band performed. The last song they performed was “Auld Lang Syne.” Ebbets Field opened the following spring and Shannon’s 23d Regiment Band performed at the opening ceremonies. (The sheet music is barely visible, but it appears to be an early version of “We Will Rock You” composed and orchestrated by a very young Dr. Brian May.) The New York Times reported that Ebbets Field cost $700,000 (approximately $17,586,310 in 2019) to build.

On April 5, 1913, Brooklyn defeated the Yankees 3 to 2, in front of 30,000 enthusiastic fans, while 5,000 more waited outside, unable to get in. I think Shannon’s 23d Regiment Band performed at both games. (On a Saturday afternoon, November 13, 1909, at the corner of Dekalb and Flatbush Avenues, the celebration of the breaking of the ground for the Fourth Ave. subway featured the “formal breaking of ground by chairman Wilcox, to accompaniment of patriotic airs by Shannon’s 23d Regiment Band and explosion of bombs.”) What did the first and third opening games look and sound like?

Ebbets Field Opens With A Victory

There was an abundance of pomp and ceremony about the opening of the new park. Early in the afternoon thousands of people were waiting at the gates and the police had their hands full getting people into the marble rotunda. They admitted the fans in small droves, squirming and pushing, and tramping on each other’s feet, and then locked he gates until they were in their seats. Then they opened the gates again and admitted another howling squad. It was slow work, but finally the park was jammed before playing time.

The inside of the park was a picture. The great stand of steel and concrete loomed high in the air, holding its admiring thousands. The upper and lower tiers of boxes held the galaxy of Brooklyn’s youth and beauty embellished and intensified by a glorious display of Spring finery and gaudy color.

The girls of Brooklyn never turned out to a game like this before, and it’s too bad they never did, because, from now on they will always be considered a big feature of a ball game at the new park.

The day was made to order. It was one of the nicest little Spring days the oldest inhabitants of Flatbush could remember. And the sky – no baseball opening description could be complete with out giving the sky a few lines. It was the same glorious canopy of pale blue arched from horizon to horizon and flecked here and there with filmy clouds of white, which looked like little puffs of smoke…

…And the band played and never stopped. The air was full of music and gladness…

…The band played “The Star-Spangled Banner” while the Stars and Stripes were unfurled to the breeze… and the band played “Here Comes Your Daddy Now”… [To the delight of Mr. Ebbets.]

The snap-shot brigade followed the parade over to the lower row of boxes…
The New York Times, April 6, 1913.

If any Brooklyn fan has the idea that C. Ebbets is through with his openings, he has another think coming to him. So far, the Flatbush Squire has had only two openings…

The demon Brooklyn holiday inventor wishes it to be known far and wide that to-day he will hold his regular opening at the palatial Ebbets Field. The Philadelphias, who licked the Superbas [Dodgers] on the Special Opening, will also be the attraction at the Regular Opening…

There will be no more flag raisings at the Brooklyn stadium for the time being. Charley, the greatest patriot of them all, would have loved to raise Old Glory again, but thought two flag raisings and parades were enough

However, Ebbets has several other frills up his sleeve, and of course, the music will be there. It would be impossible to hold an opening with out a band helping to enliven things up. Dan Shannon’s Military Band has again been hired for the occasion, and it will begin the proceedings at 1:30.

The musical programme for the regular opening at Ebbets Field follows: