Posted on March 1, 2019 by Christopher George 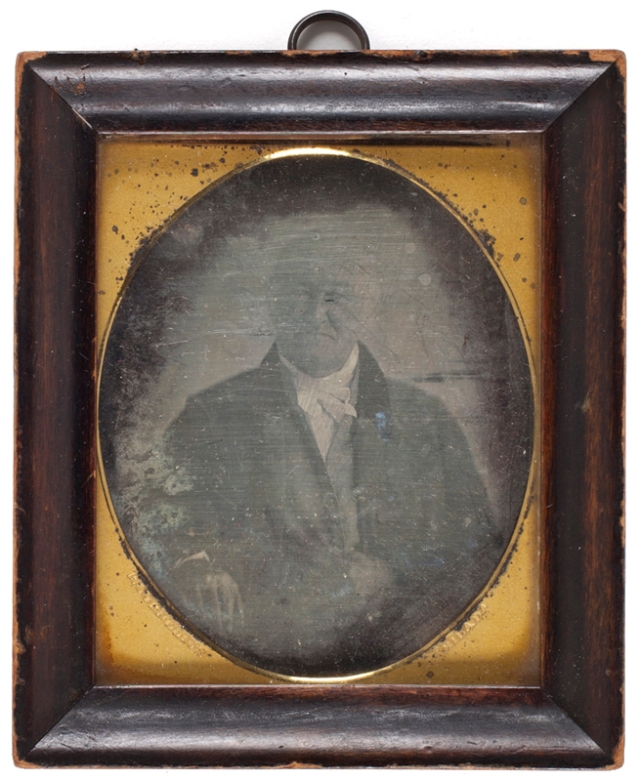 Credited with taking the first surviving daguerreian portrait in the U.S. (probably October, 1839), Cornelius, of Philadelphia, Pa., was first approached by Joseph Saxton to make daguerreotype plates. He was was intrigued with the process and made his own camera sometime after October 16, 1839. One source noted him in partnership as Cornelius and Baker in 1839-1840. He visited Wolcott’s studio in New York City in April, 1840, to study lighting, before opening his own gallery. Cornelius and his silent partner, Paul Beck Goddard, opened a studio in May, 1840 on Eighth Street and Lodge Alley. By November J.F. Watson advertised as successor to Cornelius. Goddard and Cornelius may have spent the winter experimenting, and opened a new gallery at 278 (now 810) Market Street by June, 1841. Cornelius closed his studio by 1842, but took sporadic images probably through 1847. (797.2000)

Daguerre (1787-1851) announced his invention of a photographic method to the French Academy of Sciences in August 1839. That October, a young Philadelphian, Robert Cornelius, working out of doors to take advantage of the light, made [a] self-portrait using a box fitted with a lens from an opera glass… in the yard behind his family’s lamp and chandelier store… Early daguerreotypy required a long exposure time, ranging from three to fifteen minutes, making the process nearly impractical for portraiture. (Source: loc.gov: “Photographic Material,” by Carol Johnson. In Gathering History: the Marian S. Carson Collection of Americana, 1999, p. 100)

This entry was posted in Fans in a Flashbulb and tagged daguerreotype, portrait, Robert Cornelius. Bookmark the permalink.