Posted on November 14, 2018 by Christopher George

The Opera Opened Last Night. Weegee made this picture. He tells how on Page 2. Other pictures, Pages 19-21.

Weegee Covers Society
“Last night, at the opening of the Metropolitan Opera season, I rubbed elbows and stepped on toes of the society crowd (and I don’t mean cafe society). On the outside of the opera house on W. 39th St., after the performance, between the mink coats and the high hats, I felt like an Italian in Greek territory. Without a high hat the cops showed you across the street. They gave me dirty looks but I was saved by my press card. The jam was terrific. All the high hats were looking for their limousines. (Picture on Page 1.) It was a battle of the minks and the fur flew. The cops were so polite to the carriage trade it made passing cab drivers cry with envy. The women were young and, oh, so beautiful, and the men were elderly. I think most of the limousines were rented for the occasion. They had that funeral look. The license numbers started with T and the number followed each other like in taxicabs. But I guess the suits and the top hats were their own.” – WEEGEE PM, December 3, 1940, p. 2 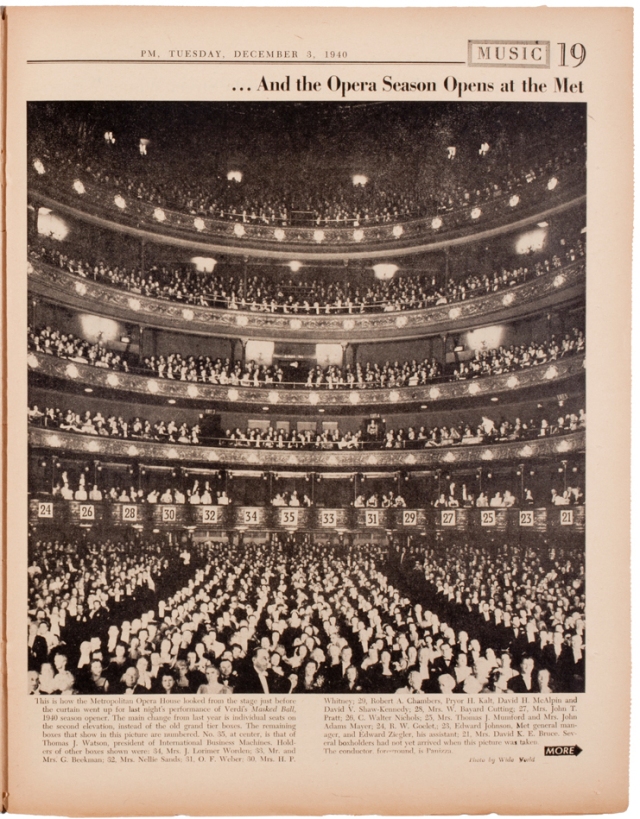 On Stage, Colorful Costumes… On the Street, Winter Wraps…
In this finale of Act 1 in Verdi’s Masked Ball, the opera appears for the first time in its original setting, the court of Gustave III of Sweden, who was assassinated in 1792. A similar attempt had been made on the life of Napoleon III and it was thought wise to change the scene to Boston where intrigue had less importance. Oscar the Page at the center is Stella Andreva. At the left is Jussi Bjoerling, who sang the lead. (Photo by World Wide)

Waiting for a chance to sit way up in opera heaven, far above the mammoth stage, is the typical line of true music lovers who have stood for many hours with the vague hope of finding a seat. The men and women in the line are mostly music teachers. (Photo by Gene Badger, PM Staff)

In the afternoon performers had to report for dress rehearsal. Here are Zinka Milanov and Alexander Sved. (Photo by World Wide)
PM, December 3, 1940, p. 20

… And in the Lobby, Boxholders Wearing Glamorous Gowns
Lily Pons [opera singer, (1898-1976)] wore one of the really beautiful gowns of the evening, as she never fails to do for occasions like this. It’s white satin, low-cut, with silver spangled plume design. The long cape is made of rare chinchilla.

Mrs. Louise Revenga of Venezuela in one of the most striking gowns. The skirt is hooped, of navy satin trimmed with pink satin. Her headdress is ostrich plumes and flowers. Everybody wore some kind of hair ornament.

Helen Michalis in a gold lame-cloth dress that has a longblack velvet bodice. Several off-shoulder gowns, such as this were noted. Pinning flowers to bags, muffs or in the hair is definitely the thing to do.

Marian Oates wore all-white, a full but straight-hanging dress and ermine jacket. White crepes, satins, nets and of course, ermine, were popular; all colors from bright to pastels and including two-tone combinations, even more so.

Mrs. Bryon Foy wore an extremely wide-skirted dress of purple velvet, self-printed, under her chinchilla jacket. The large majority of full skirts seen indicates that the narrow silhouette has not caught on for really formal wear.

Simone Simon [French actress, (1910–2005)] in a light blue satin skirted dress with a long-sleeved mauvish brocade top. Unlike many, she left some of her jewelry home, was outstandingly simply and charmingly dressed.
(Photos by Alan Fisher, PM Staff.) 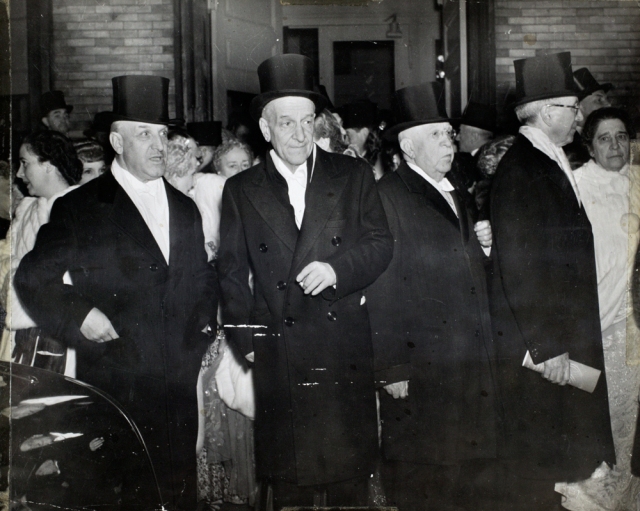 In preparation for the 75th anniversary of “The Critic” this blog post is a look at Weegee’s and PM‘s coverage of the opening night at the Metropolitan Opera in 1940. It was PM‘s first coverage of the opening of the opera season and perhaps these were Weegee’s first opera photos. (If that’s true, it will be interesting to see how his coverage of society evolves.) As the front page of PM reveals, in 1940 the opera opened almost exactly a year before the U.S. entered World War Two, and in Europe, World War Two was a little over a year old.

The top photo, [Opening night of the Metropolitan Opera, New York], (3056.1993), was distributed by Acme Newspictures. In the extraordinary book Extra! Weegee the caption on the back of the photo reads: “Opera Epilogue (1). Tophats were out en masse for the opening of the opera in New York City, recently, and after the opera, the tophats were looking for their cars. Credit Line Acme, (12/6/40).” (Extra! Weegee, p. 185.) In the bottom photo, [The opera opened last night, Metropolitan Opera, New York], (1061.1993), Mrs. George Washington Kavanaugh (Marie Miller Kavanaugh) (1867-1954), one of the criticized, and Mrs. Leonora Warner can be spotted behind the waddle of men wearing top hats.

This entry was posted in Fans in a Flashbulb and tagged 1940, Manhattan, Metropolitan Opera, New York, New York City, opera, PM, The Critic at 75, Weegee, Weegee Wednesday. Bookmark the permalink.