Pencils, or Working Together: “It’s fun to make something that you believe in.”

Posted on September 3, 2018 by Christopher George

Sol Libsohn, [Shop Steward for Local 77-A of Textile Workers Union, John Lombardo gets details from machinist Rapacioli (right) foreman Miller (second from right) and the two men, who say the new job is too heavy and dirty. Miller suggested they move outside to argue, American Lead Pencil, Hoboken, New Jersey], 1949 (1301.2005) 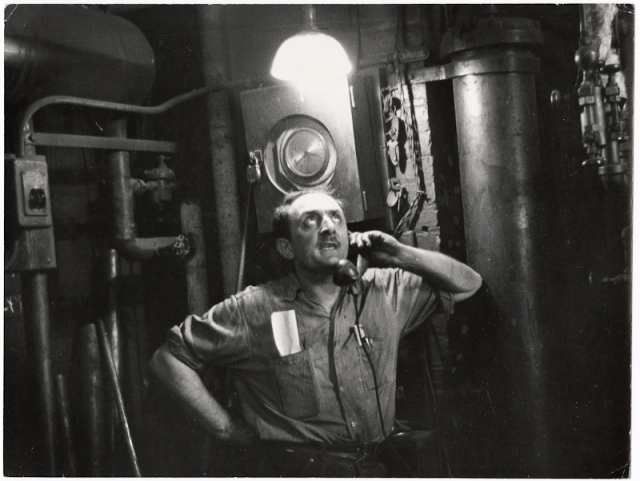 Sol Libsohn, [Word reaches Jon Lombardo, union steward, that management is trying to pull something. He has consulted with management on the new tank, but had not foreseen the reaction of loaders Dell Aguila and Ciciuto who threaten to walk out. American Lead Pencil, Hoboken, New Jersey], 1949 (1300.2005)

Sol Libsohn, [A conclusion is reached in a four man conference: Management and union agree that immediate steps will be taken to make the job of loading the new $700 tank lighter and less dusty, after which this operation will be handled by one man. American Lead Pencil, Hoboken, New Jersey], 1949 (1299.2005)

Sol Libsohn, [Lunch is no picnic for those in the “pigpen.” An old complaint among workers in the grimy lead department – about 8% of the 650 employees is the lack of a clean place to eat. But because the company’s industrial relations are basically good, this is not a major source of friction. The workers are waiting, with reasonable patience, for a labor- management committee to carry out its plans for a new lunchroom], 1949 (1305.2005) 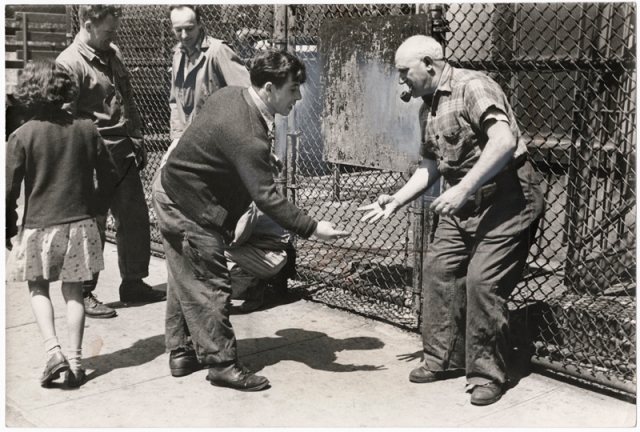 This fascinating film: “Working Together: A Case History in Labor-Management Cooperation” (1951), on archive.org features some of the same people, “actual workers and company officials,” who are in Sol Libsohn’s photos.

A case history in labor-management cooperation. Based on a 1949 study “Partnership in Production.” The film traces the actual history of labor relations at American Lead Pencil Co. of Hoboken, N.J. In 1937 unionization was introduced in an atmosphere of bitterness and hostility on both sides, but today a give and take relationship exists to the benefit of both sides. “Working Together“

Working Together. A case history of labor – management cooperation. The Labor Committee of the Twentieth Century Fund, whose members are leaders of organized labor, management and the public, believes that thoughtful men [and women] on both sides of the industrial fence are striving for mutual understanding. This film pictures what actually happened in a company which has had nine years of constructive peaceful relations between management and union. No on plant can be typical of all plants. Each one differs from the rest in the way it does things. This is the true story of just one American factory in which both workers and management have learned from hard experience that working together pays. “Working Together“

Although the American Lead Pencil Co. appears to have been erased (pencil pun) from Hoboken (and Bayonne). My pencil research (not as pointless as a broken pencil) has lead me down this interesting (of course workers in a pencil factory play rock, paper, scissors) and bold line: just a few blocks from where the above photos are housed in a climate controlled environment (and where this blog post was penned) is the General Pencil Company, where they still (and have been for over 127 years) manufacture pencils.

Four years later, in 1889, Oscar A. Weissenborn, Edward’s son, followed in his father’s footsteps by founding his own pencil company. He began making pencils in a large room of the family home in Jersey City, New Jersey. He set up his own machine shop because at the time it was impossible to buy pencil making equipment. The following year Oscar rented a floor over a grocery, and in 1891 he rented an old mansion for a factory. He called the operation the “Pencil Exchange”. In 1914 he moved into his own factory in Jersey City.
James has taught the art of pencil making to his three children, with his daughter Katie Weissenborn joining the company in 1991. Now James and Katie work side by side selling General’s® Artist Pencils and sharing their passion for art. General Pencil continues to handcraft its pencils using sustained yield genuine California Incense Cedar wood and traditional quality formulas in the same Jersey City factory… [General Pencil continues its] commitment to quality and its drive to create products that are the American-made choice for aspiring and world renowned artists alike. generalpencil.com