Posted on August 27, 2018 by Christopher George 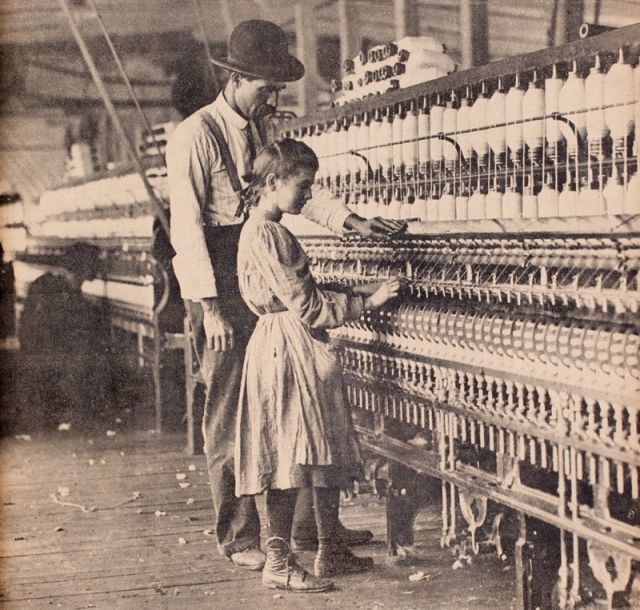 Lewis Wickes Hine (1874-1940), The superintendent and one of the spinners, Catawba Cotton Mills, Newton, North Carolina. Others smaller still. Ten boys and girls this size and smaller out of a force of 40 employees, December 1908

The Supreme Court’s decision this week upholding the wage-hour act and empowering the Government to regulate child labor under that act would have brought joy to the heart of Lewis W. Hine. “Lewhine,” as he called himself, was one of America’s first documentary photographers and the first man to use a camera skillfully as a weapon in the long battle against exploitation of children.
Lewhine died three months ago, at 66, near poverty. No one can say precisely how much his pictures contributed to public understanding of child labor evils, but the contribution was great. A leader of the movement has said of him, “The work Hine did for this reform was more responsible than all other efforts in bringing the need to public attention. The evils were intellectually but not emotionally realized until his skill, vision and artistic finesse focused the camera intelligently on these social questions.”
When Hine first took his camera into places rarely seen and never before photographed, the public was just becoming aware that six and seven-year-old children were sweating 10, 12 and 14 hours a day in factories and fields for often as little as 10 cents a day. Hine’s work was slow, difficult: he had to use plates with one-tenth of today’s speed and a slow lens.
This week, 30 years after Lewhine took the picture above the Supreme Court gave Congress authority to regulate child labor. The decision marked the end of a long fight by anti-child labor progressives.
The battle started before the Civil War but gained little momentum until the early 1900s. Congress passed the first child labor law in 1916. It was invalidated two years later by the Supreme Court on grounds that it interfered with children’s and employer’s freedom of contract. Congress tried again in 1919, and again in 1922 the Supreme Court declared the law unconstitutional. Next a constitutional amendment was tried. Passed by Congress in 1924, it had been ratified by only 28 of the necessary 36 states when Monday’s decision was handed down.

The picture above of the young spinner was one of approximately 5,000 photographs that “Lewhine” made between 1908 to 1912 for the National Child Labor Committee. It’s particularly relevant since there has not been a vote in Congress to raise the Federal minimum wage, $7.25 an hour, since 2009. Five states (Alabama, Louisiana, Mississippi, South Carolina, and Tennessee) have no state minimum wage. Washington D.C. has the highest at $13.25 and two states (Georgia and Wyoming) have lower ($5.15) state minimum wages. (Source: US Department of Labor.) In the near future several states, including California and New York, will have a $15/hour minimum wage and the Fight for $15 movement continues its campaign.