The rich history of snapshot photography has yet to be written. But when that text is transcribed it will finally be possible to understand the complex role that snapshots once played in framing social identity and everyday life in the twentieth century, in every country, across several generations, in very ritualistic and historically specific ways. The consummate middle-class art form, snapshot photography allowed amateur photographers in those pre-Tumblr days to document and to some extent to invent their lives and accomplishments. Occasionally, however, by luck or misfortune, the pictures made by those avid backyard snapshooters exceeded the bounds of the routine occasion. Collectors John and Teenuh Foster of St. Louis, who recently donated to ICP the fantastic photograph above, seek out such photographic aberrations, which they refer to as “accidental mysteries.” The tiny picture is a small miracle of dramatic composition. One girl in a ca. 1960 Brownie uniform chomps down on a slice of watermelon while the other girl twists to escape from the dress she is wearing, exposing one bare shoulder. The joyous summertime relationship between the two adolescent girls and their surprisingly balletic poses create an image that reads like a vernacular Sally Mann. The photographer here is anonymous, however, reminding us that thrilling images such as this, though rare, could be made—or discovered—by almost anyone. (2012.24.1) 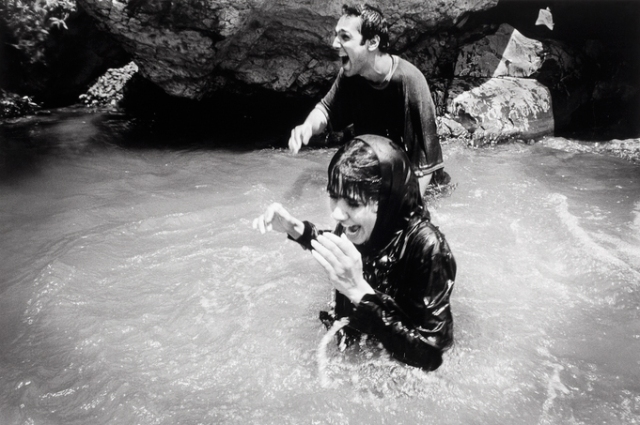 Kai Wiedenhöfer, Young people taking a bath from the summer heat in a creek in the Alborz Mountains just north of Teheran. Teheran, Iran, 2001 (2013.7.6)