Posted on March 6, 2018 by Christopher George 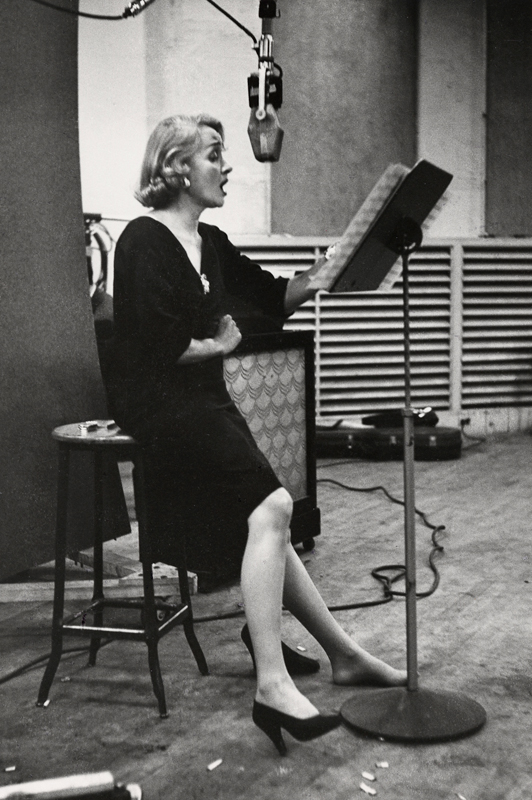 Then late one rainy night I received a call to cover a recording session of Marlene Dietrich in which she would sing the songs she had sung to the Allied troops during the war… I was a replacement for Ernst Haas, who was not available. But I didn’t mind; Marlene was my first “personality,” and I was thrilled.

I had heard that when she recorded she dressed in trousers and a beret, but on the evening we worked she arrived in a short cocktail dress on which there was a large gaudy diamond clip. The other getup would have been more appropriate, but there were the wonderful legs instead. She was trailed by two men. One was Jean Gabin and the other a short, pockmarked man whom she introduced as a friend from Hollywood. Adroit questioning revealed that he was her astrologer and that he had decreed that this miserable wet night was the propitious time to make the recordings.

The time was certainly propitious for me. She worked diligently, “like a ditchdigger,” said my notes, from midnight when she arrived until six in the morning. I followed her from rehearsal to recording to playback and back again as she worked, and nothing was questioned or off-limits. I heard later from our mutual friend Leo Lerman that she called him when we finished and complained that I had been there all night taking pictures. He asked why she hadn’t stopped me. She said it had never occurred to her, I had done it with “such authority.”

Magnum had been informed by Columbia Records that I could have either twenty-five dollars with the negatives belonging to them or I could receive no payment and own the negatives. Of course, I chose the latter. There was also a stipulation that Marlene would have to vet the pictures and have final right of approval. And she wanted to see them immediately. I went straight from the session to my darkroom (an improvised cupboard that had formerly housed a large refrigerator in my bedroom and which I had to enter sideways because it was so small). I printed carefully to make her look as young and attractive as possible.

While I worked, there were phone calls from Columbia Records to arrange a time next day for me to see Miss Dietrich with the pictures. There was also a call for me to meet Mme. Edmonde Charles-Roux, then editor of French Vogue, to show her my portfolio. I arranged to go to Vogue first, and from there to Marlene. Mme. C. loved my portfolio, she said, but what was a second envelope I was carrying? Could she see it? Another time, I said. But what was it? Embarrassed, gauche, I told the truth: Marlene, I said, but she must see the pictures first. Nonsense, said Charles-Roux: just let me see them-I’ll never tell Marlene I saw them. Too inexperienced to deal with the situation, I showed her the pictures. Again she reassured me that she would say nothing.

I went directly from Vogue to Marlene’s house, where there was a message to say that she was away for the day and for me to leave the pictures and my phone number. That night the Vogue editor went to a party given by Condé Nast for Marlene and told her she had seen terrific pictures of her done by me. Marlene’s fury was predictable. She called the record company and raged. I had broken a sacred trust. She was to have seen the pictures first. How dare I? She said she had been so angry that she had torn up the pictures without looking at them. The PR person from Columbia Records called me. What to do? I had another set made by a commercial printer and sent them to Miss Dietrich.

When she went through the pictures she wrote instructions on each (in eyebrow pencil) for retouching: narrow down the chin, cut down the waist, remove the dimple from the knee, the ankle should be slimmer, etc. I went into the darkroom again, printed them well, wrote captions and a short text and took the pictures to Esquire magazine, which used them across two pages. I did not retouch them – just printed them well, and removed two prints she might have found offensive.

The story was to be reproduced in many magazines around the world and to be a forerunner of the changes taking place in portraiture – a documentation, a form Brodovitch called a “portrait in action,” unglamorized and unretouched. Capa when he saw these pictures said my work fell, metaphorically of course, between Marlene Dietrich’s legs and the bitter lives of migrant potato pickers. (He was right. My work still continues with the celebrated and the poverty-stricken.)

Marlene loved those pictures, and for years I was her “white-haired girl” (I went grey early) and was brought in on many occasions, from her opening the circus to an appearance at the Museum of Modern Art to more recording sessions. 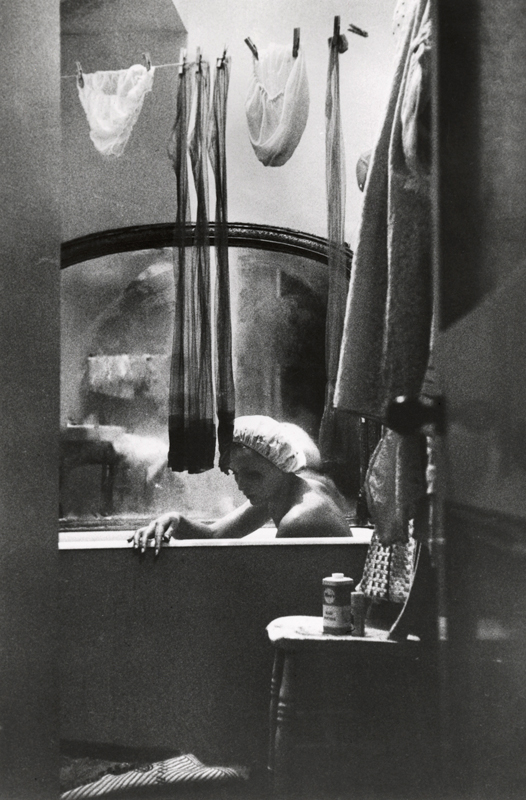 On November 20, 1980 Eve Arnold spoke at ICP about the photographs that she made in China in 1979, and the resulting book, In China. The above audio is her introduction, before the start of the slide show.

An excerpt of a video of Eve Arnold and Cornell Capa speaking at ICP about her life and her book In Retrospect. In 1995, Eve Arnold was the recipient of the Infinity Award: Master of Photography.. 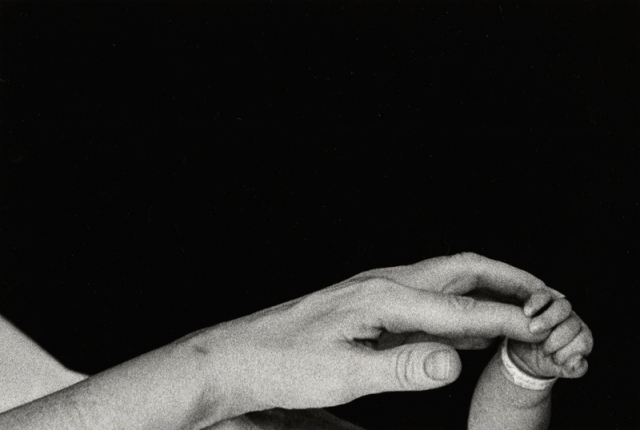 This entry was posted in Fans in a Flashbulb and tagged 1952, 1959, 1962, Eve Arnold, London, Marlene Dietrich, Women's History Month. Bookmark the permalink.