Posted on March 5, 2018 by Christopher George 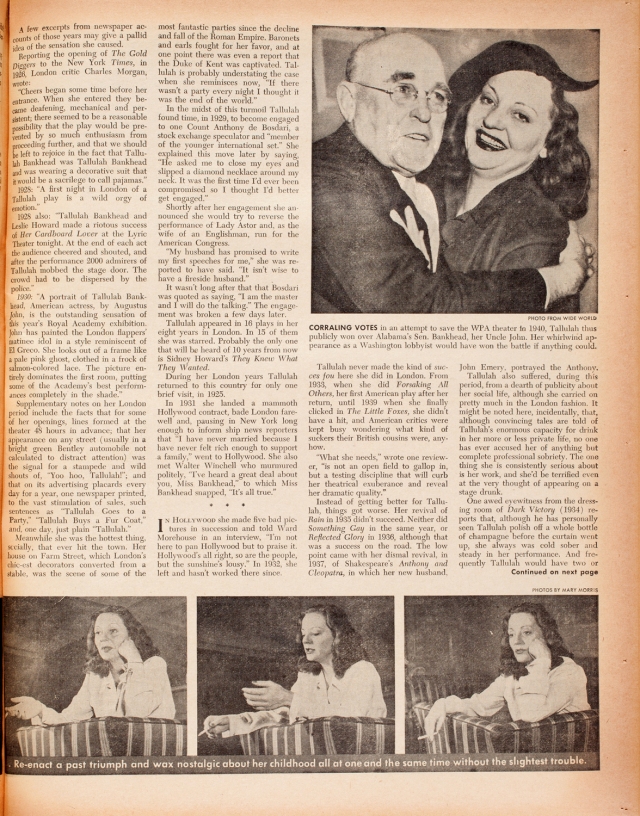 In 1942 Tallulah Bankhead (1902–1968) starred in Thornton Wilder’s The Skin of Our Teeth. Ms. Bankhead won the New York Drama Critics Award for Best Actress of the Year and a Variety Award for Best Actress. The play won a Pulitzer prize. As an actor this was one of the high points in her career. (And might have been a prelude to starring in Alfred Hitchcock’s “Lifeboat,” 1944, one of the high points of her film career.) Her life and career have been examined in innumerable newspaper and magazine stories and numerous biographies. More interestingly, importantly, and relevantly Mary Morris’s ten photographs vibrantly illustrate Robert Rice’s significant profile of Ms. Bankhead.

Mary Morris was born in Chicago, Illinois on March 27, 1914. She attended Sarah Lawrence College and then the Clarence H. White School of Photography. Morris was the first female photojournalist for the Associated Press (“the Associated Press Feature Service”) in New York, starting in 1936, and was among the first staff photographers for PM. She contributed thousands of photos, articles, and profiles to PM, first in New York (1940-42), and then in Los Angeles, for most of the newspaper’s eight year existence.

Her goddaughter, Libby Schaaf, [Mayor of Oakland, California] described Mrs. Morris Lawrence as brave and able to “talk her way into any scene.”
“That journalist’s mind never left her, even after she stopped taking pictures professionally,” Schaaf said. “She was always digging for information, always trying to connect people with each other.” Sudhin Thanawala: Pioneer photographer Mary Morris Lawrence dies