Posted on November 11, 2017 by Christopher George 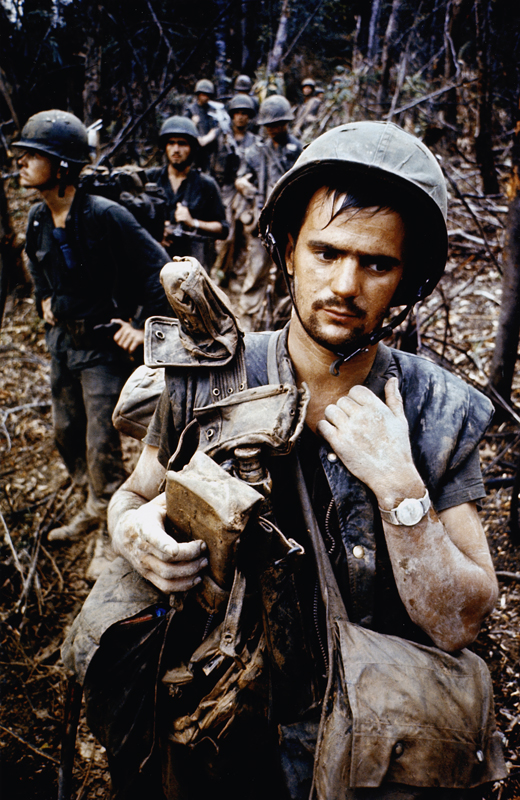 Haggard Patrol. The men filing warily through the thicket and gunner shouldering his rocket launcher across a stream are U.S Marines involved in one of the meanest, most important battles of the war. The ground they are contesting is just south of the supposedly demilitarized zone – the “DMZ – which divides North and South Vietnam. North Vietnamese troops had infiltrated the DMZ in preparation for an offensive which the Marines and other troops were primed to stop. Life, October 28, 1966, p. 30 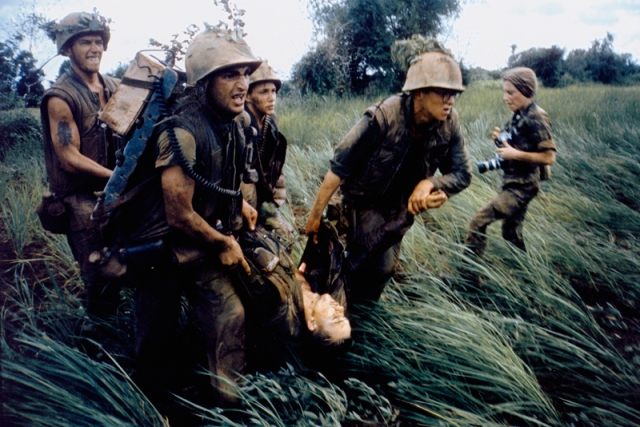 Under Fire. Four Marines recover the body of a fifth as their company comes under fire near Hill 484. “We were in the open approaching a 40 foot rise,” cabled photographer Larry Burrows, “Our point man ran to the top of the hill and was shot dead.” During the fire fight, Burrows took this picture and those on the next two pages of Marine wounded being treated at the front and helped to air evacuation points. According to a ranking officer, Marines counted more than 2,000 enemy dead in the furious ground action near the DMZ. Life, October 22, 1966, p. 36 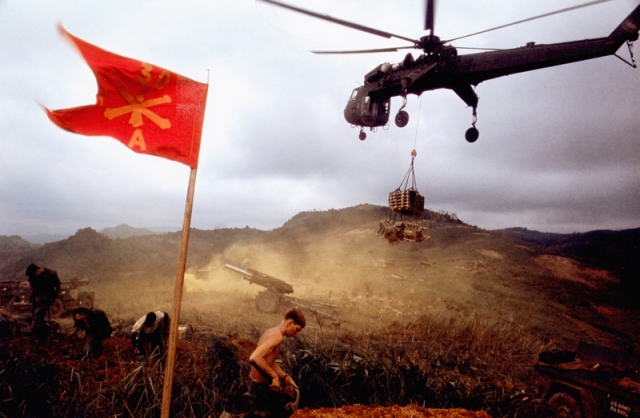 To commemorate Veterans Day we present several photos made by Larry Burrows during the Vietnam War. Born Henry Frank Leslie Burrows in London in 1926; died in Laos in 1971. A few excerpts from an informal conversation between between Burrows and Edgar H. Needham, conducted while they were drinking coffee in Burrows’s office, in Hong Kong on Chinese New Year’s Eve, January 1971, and published in Popular Photography in 1971:

“It’s a thing I’ve said many times: does one have the right to capitalize on the grief of others? The only reason I can give myself is that if one can show to others what these people are going through, in this scene in Vietnam or wherever else in the world, then there’s a reason for doing it.”
Burrows’ incredible ability to remain cool when things became, as he would say, “a bit difficult,” was well known. I asked him if he ever got frightened. He gave me a penetrating look, capping it with that twinkle of his and replied, “Everybody gets frightened; I mean anybody who says they’re not frightened is an absolute, bloody fool.
“In my case,” he went on, “surely there are moments when my lips go dry and I feel a little bit uncomfortable. In the first place, you’ve got to be a fatalist; and secondly, you’re trying to get on one small frame all this turmoil around you… you realize that you could take a hundred photographs and nothing would possibly convey the amount of tension at that particular moment. And when you realize the limitations of the still camera, your mind is tied up.
“For over 20 years, I’ve been involved in various forms of conflicts and realizing each time that trying to find that one telling photograph becomes just that much more difficult. In Vietnam, for example, at no other time in the history of war or conflict does one come in so close to human suffering, and so it’s no longer a tank smoking; you need more than that.”
Larry was concerned about being labeled a “war photographer.” “That’s actually a lot of twaddle,” he almost exploded. “In the old days I photographed, for example, a hell of a lot of paintings. You look in the cabinet over there, and there’s an 8×10 camera, there’s a 4×5. I’ve got a mass of floodlights and strobe light and so on.”
“Well,” he replied, “I’m an adventurer by nature; this is why I love this part of the world with the different nationalities and the different religions. It’s a fascinating area to work in. To me, it’s a hobby as well as a job. You know I’m one of the five percent lucky ones in life who does have a job that is a hobby.”
I asked him if he thought most men lead lives of quiet desperation. No doubt about his meaning, a slight pause and a firm Yes.
Popular Photography, “A Photographers Own Story,” By Edgar H. Needham, July 1971, pp.98-99, 121-122.