“The easiest kind of a job to cover was a murder because the stiff would be laying on the ground, he couldn’t get up and be temperamental…”

Some of the photos Weegee speaks about and their original published context: 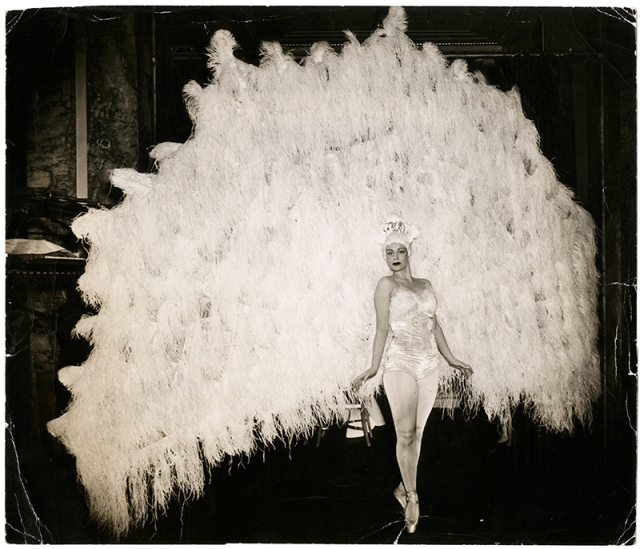 Weegee Photographs Society at the Waldorf
By Weegee
Why, I don’t know; but I was assigned to cover the Cinderella Ball.
“Get plenty of fashion pictures,” was the editor’s parting shot.
So I found Ilka Chase, who talks about fashions on the radio, and asked her:
How does a police reporter go about describing fashions?”
“Just write down what you see,” she told me.
She had on a tomato-red dress, trimmed with white. In front was a pocket – something like the pouch on a kangaroo – that held real red and white carnations.
One exotic girl kept running in and out of the dressing room. She was dressed like a chicken but needed her peacock tail. Only a mechanic could fasten it on. He arrived just in time to save the show. All the women had that after-the-beauty-parlor look- DOUBLE STRENGTH. Even the cigaret girls looked Park Avenue. And while the couples danced they just left their gold pocketbooks and furs at the tables. I didn’t see any signs about checking valuables with the cashier.
PM, April 18, 1941, Vol. II, No. 2189, pp. 16-17 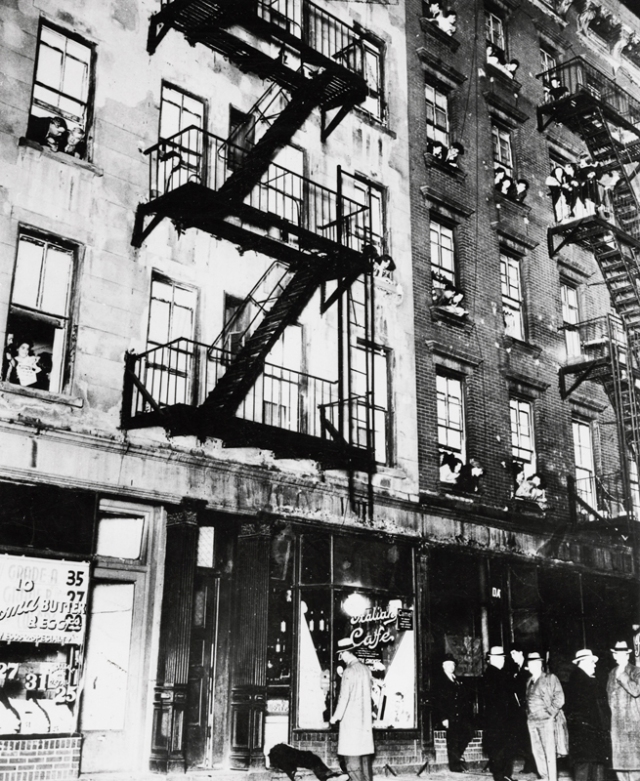 Murder in New York
After dusk on Nov. 16 Angelo Greco stood smoking outside his cafe in Manhattan’s Little Italy. Emerging from the darkness, a man drew a gun, fired four shots, fled into the night. Greco tumbled dead in his doorway. From windows above, heads popped out. Police cars screamed into the street. Close in their wake arrived Arthur Fellig, famed free-lance photographer (LIFE, April 12, 1937) who sleeps behind police headquarters, has a short-wave radio in his car. He listened briefly while neighborhood folk stolidly disclaimed knowledge of the murderer, then stepped back and photographed this dramatic scene.
Life, November 27 1939, p. 27

Street Scene in New York
After the guns ceased barking and the gunmen fled, neighbors peered from the fire escape and almost every window last night for a glimpse of the body of Anthony Greco, slain in front of his own cafe at [10 Prince St.]
New York Post, November 17, 1939 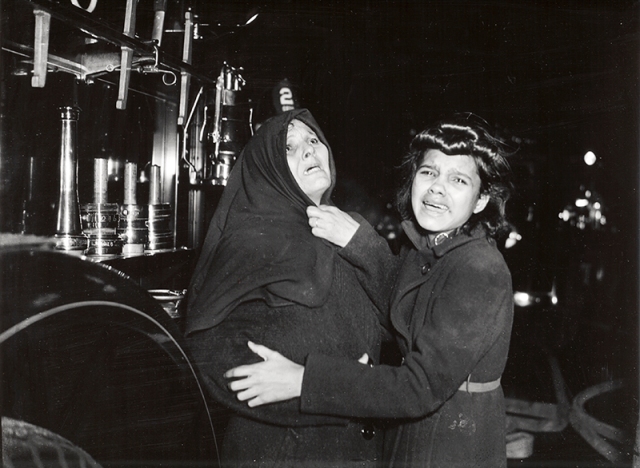 Mother and Son Die in B’klyn Fire
Mrs. Henrietta Torres and her daughter, Ada, photographed just after they were rescued from a two-alarm fire at 41 Bartlett Street, Brooklyn, early today. Mrs. Ramonia Malave and her son, Edward, relatives of Mrs. Torres, were brought down later – dead.
New York Post, December 15, 1939 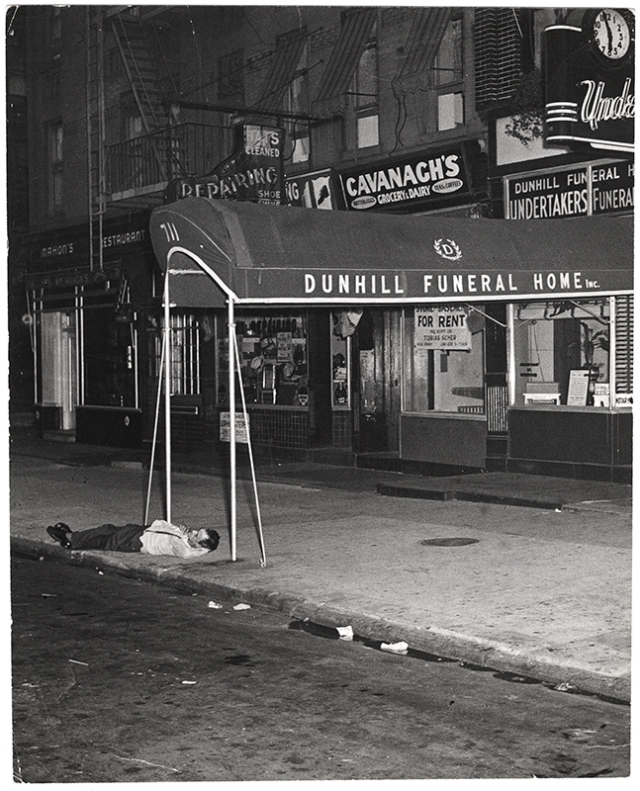 It is now almost six in the morning… it is still dark… but the church is open… and the early morning worshipers find solace inside… except for this tired Sunday traveler who, a few blocks away, finds a resting place underneath the canopy at number 711 Amsterdam Ave.… This avenue is full of saloons, and they are called just that… no fancy foreign names like Cocktail Lounges… So sleep on stranger… no one will bother you… not even the cops… Sunday is a good day for sleeping – so is any other day – when one is tired. Naked City, 1945, p. 19 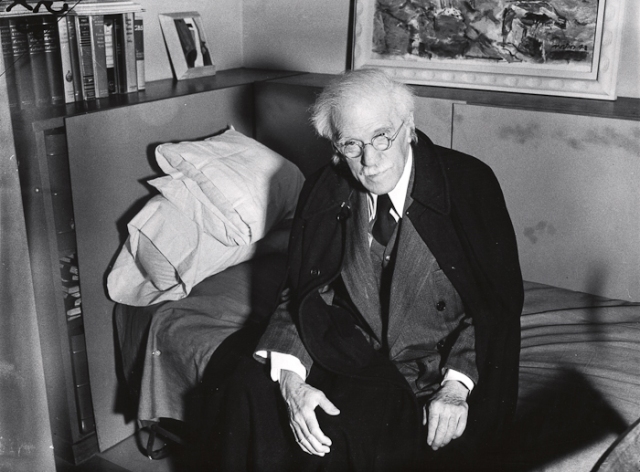 Weegee meets a great man
Weegee brought in a photograph of an old man sitting on a cot, his hands in his lap. Weegee is the cigar-smoking, crime, fire and seamy-side-of-life photographer who lives across the street from police headquarters and does his best work from midnight on.
“This is Stieglitz, Alfred Stieglitz, ” said Weegee. “He’s a great photographer. They called him the Old Master of the Camera in the Saturday Evening Post, [Thomas Craven, “Stieglitz – Old Master of the Camera,” Saturday Evening Post, 216 No.28, January 8, 1944] a couple of months ago.
“For me he is the answer to a question I ask myself sometimes,” said Weegee. “Hundreds of photographers, amateur and professional, including myself are trying to get recognition.
“It’s so tough and impossible that sometimes it makes your heart ache. This Alfred Stieglitz, he became famous both in Europe and America – one of the three, four greatest photographers.

One day he spoke
“On Madison Avenue, in the fifties, you can see him any morning, walking alone, an old man in a black hat. No one bothers to look at him. Just another character. I’ve noticed him many times, walking as if in a trance. I wanted to talk to him, but I was afraid to disturb him. Finally, one day I did. I walked up to him and said, “You Stieglitz?” He stared at me as though I had woken him from a dream. I told him my name. You know, I thought maybe he had read about me in PM or in the camera magazines. He told me he never read about other people or himself.
Stieglitz invited Weegee to his gallery…
“His gallery is called An American Place,” said Weegee. [509 Madison Avenue, Room 1710, more info]“The name was printed on the door. When he opened it, there was a strong smell of disinfectant, like in a sick room and it was fitted up with paintings hung on the wall.
“There was cubbyhole at the back of the gallery, with a cot in it, and Stieglitz slumped down on it, too exhausted to take his cape off. He started to talk, the most famous photographer in the world, the man who sponsored unknown painters and sculptors who are famous today.
“Stieglitz pointed to a phone near his cot. It never rings, he said. I have been deserted. The paintings on the wall are orphans. No one comes up to see them!
“He was a failure, he told me,” said Weegee, “and others were successful because they had wanted money, because they were politicians, showmen. He himself had not made a photograph in 10 years, and he had never used the products of Eastman Kodak because of their slogan You push a button. We’ll do the rest.”

He cried himself to sleep
“He told me: I am 81 years old. The happiest time in my life was in Berlin, at the turn of the century, when it was free. When I returned to America, I used to cry myself to sleep every night for two years thinking of the dirty streets here.
“I looked around the studio and asked Stieglitz how he lived, how he paid the rent… The rent and the expenses for the studio, about $4000 [approximately $53,345.91 in 2015] a year, were contributed by the artists when they sold any of their paintings and other interested individuals.
“Suddenly he slumped over in pain. My heart. It’s bad. He said it in a whisper as he slumped over on the cot. I hung around there for a while, waiting until he recovered. And then left quietly and shut the glass door with the words painted on it, AN AMERICAN PLACE.
“It doesn’t seem right that such a great artist should have such a little reward,” said Weegee.
PM, May 7, 1944, Vol. I, No. 277, p. M3

Excerpts of Weegee’s portion of the “Famous Photographers Tell How” LP were first posted on-line on the Weegee’s World website, in 1997. Seen here on the Internet Archive’s Wayback Machine. By 1958, when the record was released, it had been over a dozen years since Weegee, “a perfectionist,” stopped making the photos that he was speaking about. By then he was up to his knees in cheese-cake and up to his multiple eyeballs in distortions and caricatures; and after he worked for a few years in Hollywood and Europe he returned to midtown Manhattan and was working on many photo-based projects.

Weegee tawking, with surprising modesty, (“What I did anybody else can do.”), and unsurprising humor, (“I got up 9 o’clock one night, and I says to myself: I’m gonna take a nice little ride and work up an appetite…”) is truly a treat. Weegee, “truly a great photographer,” was born 118 years ago today, June 12, 1899. 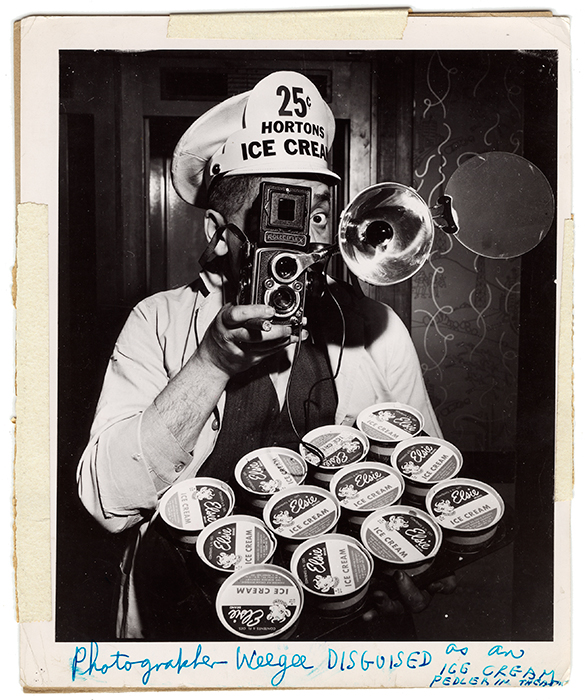 1 Response to “The easiest kind of a job to cover was a murder because the stiff would be laying on the ground, he couldn’t get up and be temperamental…”