WILLIAM MCNAUGHT: […] When did you first begin to do photography yourself?

DOROTHY NORMAN: In ’31. We had insisted that there be a darkroom at The Place — which Stieglitz had not had in New York.

WILLIAM MCNAUGHT : How did it happen? You said early on that you loved his photographs. And was that your first real interest in photography?

DOROTHY NORMAN: In photography, yes… [I] lived through my eyes so tremendously that I constantly took photographs with a Brownie — I forget what they were called, not the square Brownies but the oblong ones that had an extension. And I was always disappointed in what I photographed. But I fell in love with everything as I traveled that struck me as extraordinary, or simple and beautiful. Stieglitz started to photograph me in ’30,’31…. At the Intimate Gallery I was too shy to bring my stupid camera and take my stupid, miserable photographs. But I don’t know why I had enough courage to take my camera with me to An American Place [53rd Street and Madison Avenue], because by then I had seen a great deal in the field of photography, and of course I’d looked at Camera Work, which Stieglitz had shown me. He gave me some issues, and then I bought some whenever I found them. Stieglitz tried to make up a set of Camera Work for me and I have some photographs I took before I got a Graflex. The way I acquired a Graflex was this: I was so much interested in photographing people, and Stieglitz had a four by five Graflex. He said to me one day, use my camera and I’ll show you what to do. It was very heavy, but it was marvelous to be able to look into the ground glass and really see what you were doing. But the camera was too heavy for me. This was during the Depression — ’31 and I was scared to ask my husband to have one bought for me because they were quite expensive. I thought my husband would think I was mad, but Stieglitz bought a 3 1/4 x 4 1/4 camera, he thought it was perfectly fine. Stieglitz sent for the Graflex and bought it for me. He said, “You can pay me back when you can.” So that was decided in a split second, like that. Then he said, “I’ll show you what to do.” What he told me was to shut down as far as possible, take as long exposures as possible and then just go ahead and photograph, photograph, photograph. I have a number of the first photographs I took,which I would send to Stieglitz. And he would write about them — I have a whole portfolio. He put on the back of them, “Lovely, perfect, beautiful.” But they were awful, just awful. Yet his encouragement was so important. Then he said he would show me how to develop and print.

WILLIAM MCNAUGHT: I was going to say, who printed them?

DOROTHY NORMAN: I did. But let me tell you what he did. He bought a bottle of developer and he read from it: three parts, whatever it was called — one part of whatever it was called and three parts water, and keep shaking your negatives at such and such a temperature. Well, there was no way you could measure the temperature and the time was not always accurate. Because when you were in the darkroom and you started to develop your negatives they looked fine while they were wet. And then when you took them out to daylight they were just miserable. So it was up to me to learn what to do. But Stieglitz did show me the first elements and he’d stand over me in the darkroom and watch and say, “I’d leave it in a little longer.” And his doing that meant a great deal. But I learned more from looking at his photographs in terms of quality, not in terms of what I would photograph, than from anything else. And it was extremely helpful, his encouragement, and initial instruct ions. But I did not go to a school of photography and I did not know the chemistry of photography. So that I was terribly fortunate, as I was in terms of writing, to keep on just writing, writing, writing, just the way I kept right on photographing… 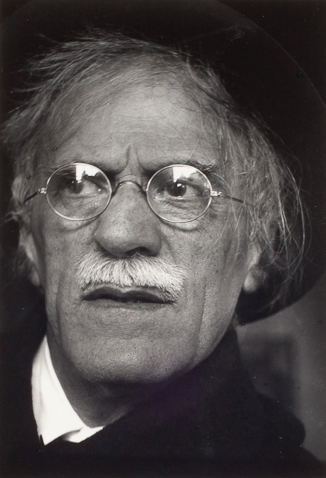 WILLIAM MCNAUGHT: How had you first met John Cage?

DOROTHY NORMAN: Oh, I suppose in the thirties or early forties. He told me that Edwin Denby brought him to a party at our house — Edwin Denby was perhaps the best dance critic of the period. John said Edwin Denby had brought him to a party at the house, and we became immediate friends. We both attended Dr. Suzuki’s lectures at Columbia, and we used to drive down in the same taxi. But long before that, he had invited me to come to hear his prepared piano one evening at his beautiful apartment on the East River — on Monroe Street and the river. I was very much interested, always, in modern music, and I knew Copland and Cage and the whole group of composers — I met Ernest Bloch with Stieglitz because Bloch had been a great fan of Stieglitz’s photographs. And when I did the music issue for Twice a Year [-A Semi-Annual Journal of Literature, the Arts and Civil Liberties] I asked Bloch to contribute to it, and I had various pieces about Varèse in Twice a Year also. But I saw more of Cage, beginning in the period in which we were all at Cuernavaca, although I had seen him before. We became great friends. He’s come out here. As I say, we came back to Cuernavaca every year until I couldn’t go there anymore, and there’s no place like Cuernavaca in America. It ‘s kind of an international place, it was really quite marvelous; there were extremely interesting individuals there.