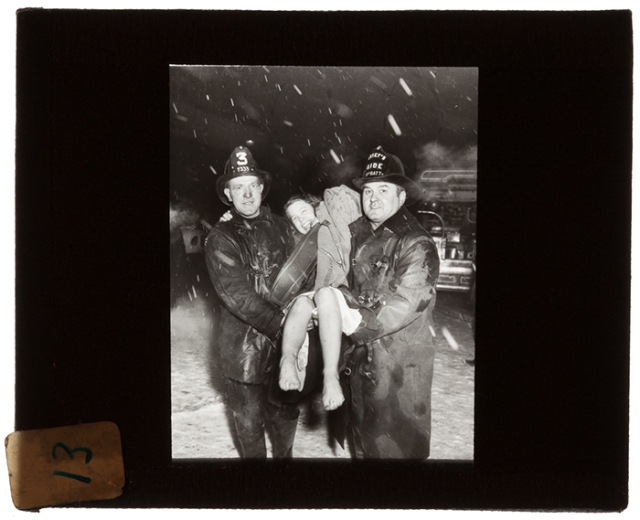 Weegee, [Firefighters carrying a musician and her violin to safety during a fire, New York], January 28, 1943 [Weegee Portfolio 16], Lantern Slide 13 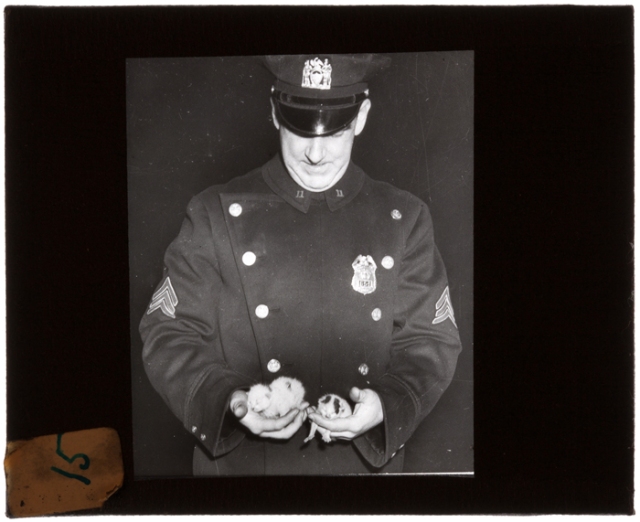 This post presents photos for projection and as printed. The above lantern slides were used in what must have been colorful and lively, entertaining and funny illustrated talks by Weegee. Below are how the images first appeared in print, in the newspaper PM.
And in conclusion a photo of Ritz, a very cute puppy.

Blaze Makes 200 Homeless, Kills One and Injures Seven
A four-alarm fire swept the upper floors of the six-story apartment house at 552 Riverside Dr., near Claremont Inn, during the snow storm early yesterday morning. By the time the fierce blaze was brought under control, 200 people were homeless, one tenant had been suffocated, another was cut by glass, and six firemen were hurt.
Many of those forced to the street in scanty attire were students at the nearby Julliard School of Music. Tenants in nearby buildings sheltered many of the homeless. A tailor around the corner on Tiemann Pl. converted his shop into a refuge, and 60 of the younger tenants were taken to Knickerbocker Hospital for the night. The Red Cross precinct disaster service swung into action, supplying clothes and funds for those who needed them.

This girl musician is laughing hysterically. She saved her precious violin, but dashed to the street in nightgown and without shoes. PM, January 28, 1943, p. 3

Ritz, a puppy belonging to William Kinsman, was one of the causalities of the two-alarm blaze at 157 W. 74th St. yesterday. Noticing the dog had a broken leg, a fireman wrapped him in a blanket and took him to the street.PM, February 1, 1944, p. 12

When fire swept the five-story loft building at 372 E. Houston St., Manhattan, the policeman, above, rescued these two kittens from a hallway. Later he gave them to Miss Sally Strumfeld, 218 Delancey St., who promised to give them a good home. Some small manufacturing firms and the Congregation Israel Anscheigal Icie Minhagsford occupy the Houston St. building. Holy scrolls were carried out by members of the congregation. PM, March 2, 1943 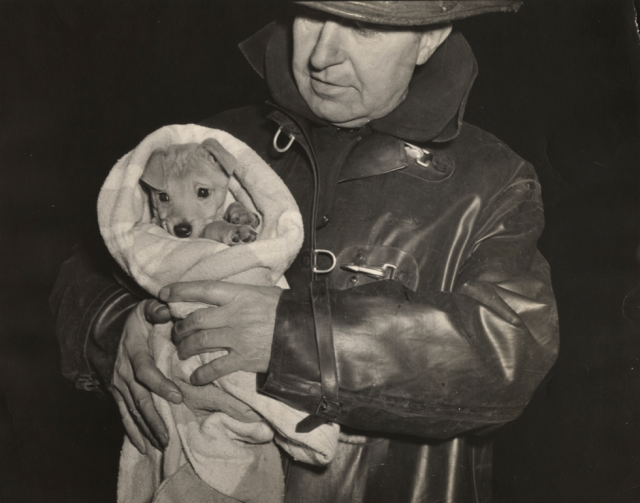