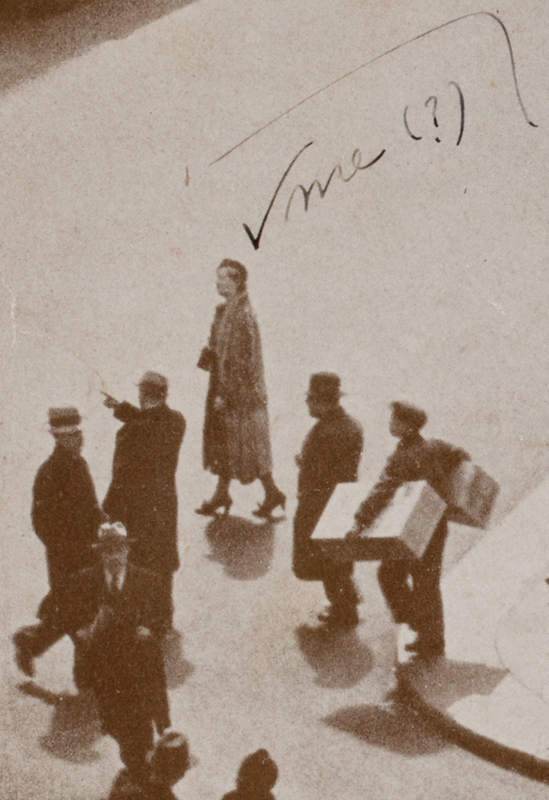 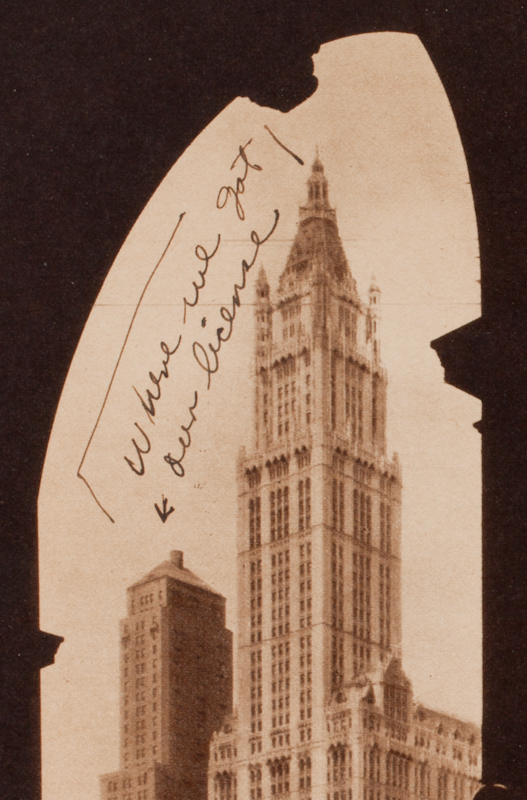 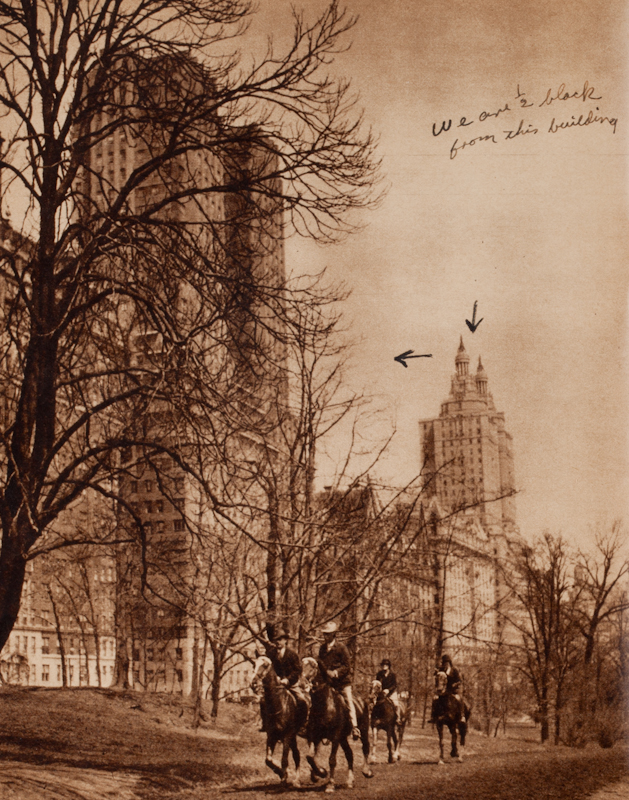 The handwritten notes add a delightful narrative and personality to this beautiful publication:

“Me” on “Fifth Avenue at 42nd Street, one of the world’s busiest traffic centers. Here streams of people from all over the universe meet in passing New York’s famous shops and sights.” Patience and Fortitude are just out of sight on the upper right corner.

“Where we got our [marriage] license” – “Through the stately portals of the Municipal Building are seen the beautiful Woolworth Tower (792 feet high), the City Hall and Court House.”

“Where Roy works, 13th floor” – “They call it ‘The Flatiron.’ The Flatiron Building, famous because of its odd shape and its being New York’s first important skyscraper. It stands at the junction of Fifth Avenue, Broadway and 23rd Street.”

“Where Mr. Prima took us along this drive” – “Riverside Drive is New York’s waterfront show place extending along the Hudson River on the west side of the city. Beautiful apartment houses and monuments extend along its way and the Palisades and Hudson River to the west add to its beauty.”

A person could easily feel nostalgic about not working in Manhattan or not living in the (apparently) more photogenic New York of the past, but perhaps it’s more productive to embrace a changing New York (FYI: NYPL’s Changing New York).

This book has been produced with all the care, expense and artistic endeavor of a $3.00 volume.
It is the first time that such a superbly illustrated guide to New York has been sold at so modest a price.
You will be proud to send it to your friends or keep as a priceless memento of your visit to this fabulous city.
Every picture in it is a masterpiece of the photographer’s art, and they have been compiled with the purpose of showing in an orderly manner all that is best to see in the great Metropolis.
Here you are taken on a visit through the city with all the interest of a personal sight seeing tour.
You are shown, intimately, the city from the air, its famous skyline, Broadway at its beginning, the busy people, the remarkable buildings, bridges, squares, streets, parks, colleges, churches, museums and other places of great interest.
These magnificent photographs have been reproduced through means of the finest process known to the printer’s art.
The book has been created with the co-operation of leading photographers; The Mayor’s Art Commission, President of the Borough of Manhattan, Department of Parks, Department of Plants and Structures, Army and Navy Air Corps, Port of New York Authority, Long Island Park Commission, all Museums and Churches, the Aquarium, the New York Zoological Park and many others. To further learn about New York get “Every Place to See and Everything to Know About New York” and “The Supervue Map and Guide to New York” in colors. Both of these are on sale at News Stands, Department stores, etc., or by mail, 20 cents each.

This entry was posted in Fans in a Flashbulb and tagged 1937, Manhattan, New York City, Photogravure, Supervue. Bookmark the permalink.