Weegee Wednesday: “Weegee Lives For His Work And Thinks Before Shooting”

Posted on March 9, 2016 by Christopher George

If You Want to Know How Weegee Gets Pictures Like These, See Ralph Steiner’s Story on Next Page 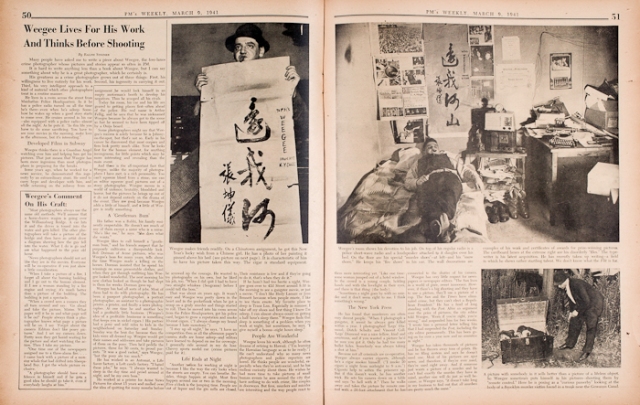 Many people have asked me to write a piece about Weegee, the free-lance crime photographer whose pictures and stories appear so often in PM… I can say something about why he is a great photographer, which he certainly is.
His greatness as a crime photographer grows out of three things: First, his willingness to live entirely for his work. Second, his ingenuity in carrying it out. Third, his very intelligent approach to a kind of material which other photographers treat in a routine manner…

And there is the all-important fact that Weegee, unlike the majority of photographers I have met, is a rich personality. You can’t squeeze blood from a stone; nor can an editor squeeze good pictures out of a stony photographer. Weegee moves in a world of violence, brutality, bloodshed and horror, but the pictures he brings up out of it do not depend entirely on the drama of the event. They are good because Weegee adds a little of himself, and a little of Weegee is really something… 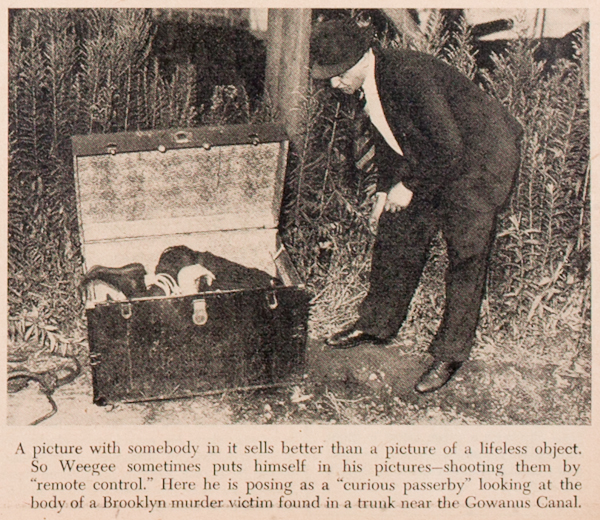 A picture with somebody in it sells better than a picture of a lifeless object. So Weegee sometimes puts himself in his pictures – shooting them by “remote control.” Here he is posing as a “curious passerby” looking as the body of a Brooklyn murder victim found in a trunk near the Gowanus Canal. 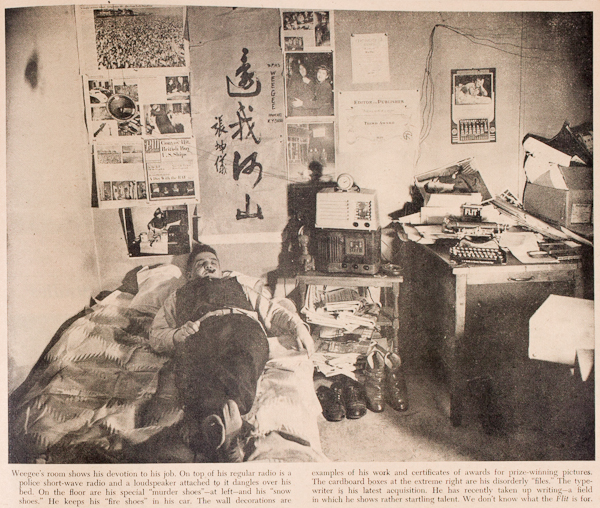 Weegee’s room shows his devotion to his job. On top of his regular radio is a police short-wave radio and a loudspeaker attached to it dangles over his bed. On the floor are his special “murder shoes” – at left – and his “snow shoes.” He keeps his “fire shoes” in his car. The wall decorations are examples of is work and certificates of awards for prize-winning pictures. The cardboard boxes at the extreme right are his disorderly “files.” The typewriter is his latest acquisition. He has recently taken up writing – a field in which he shows rather startling talent. We don’t know what the Flit is for.

Weegee makes friends readily. On a Chinatown assignment, he got this New Year’s lucky wish from a Chinese girl. He has a photo of her painting it pinned above his bed (see picture next page). It is characteristic of him to have his picture taken this way. The cigar is standard equipment.

75 Years ago today PM published one of the greatest and most significant four pages, photos by Weegee and words by Ralph Steiner and Weegee, in the history of the printed word.

“Most photographers always use the same old methods. We’ll assume that a horse-drawn wagon is going over the Williamsburg Bridge. A car hits it and the driver is tossed into the water and gets killed. The other photographers will take a picture of the bridge and then have an artist draw a diagram showing how the guy fell into the water. What I do is go and see what happened to the poor old horse.
“News photographers should not act like they are in the movies. Everyone will be co-operative if you just show a little consideration.
“When I take a picture of a fire, I forget all about the burning building and I go out to the human element. If I see a woman standing by a fire engine and crying, it’s much better than a picture of the building. The building is just a spectacle.
“When a crowd sees a camera they all turn around and say: ‘Go ahead and take the picture, Mister. What paper will it be in and what page will it be on?’ People always think a photographer knows what page a picture will be on. I say ‘Forget about the camera. Editors don’t like posey pictures.’ And I set my camera down. Pretty soon they get bored waiting for the picture and start watching the action. Then I take my picture.
“One time one of the newspapers assigned me to a three-alarm fire… I came back with a picture of a monster whale that had drifted into Sheepshead Bay. I got the whale picture exclusive.
“A photographer should have confidence in himself and if he gets a good idea he should go take it, even if everybody laughs at him.”

This entry was posted in Fans in a Flashbulb and tagged 1941, PM, Ralph Steiner, This day in history, Weegee, Weegee Wednesday. Bookmark the permalink.

1 Response to Weegee Wednesday: “Weegee Lives For His Work And Thinks Before Shooting”