Studio Visit: “Death’s Head” or “Then he locks his doors and either paints here where the light is good or he goes below to have fun with his grotesque sculpture.”

Posted on November 2, 2015 by Christopher George 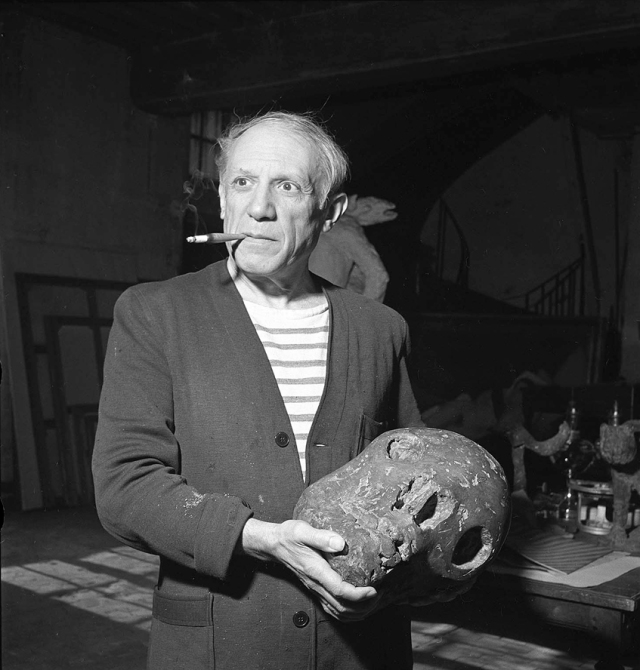 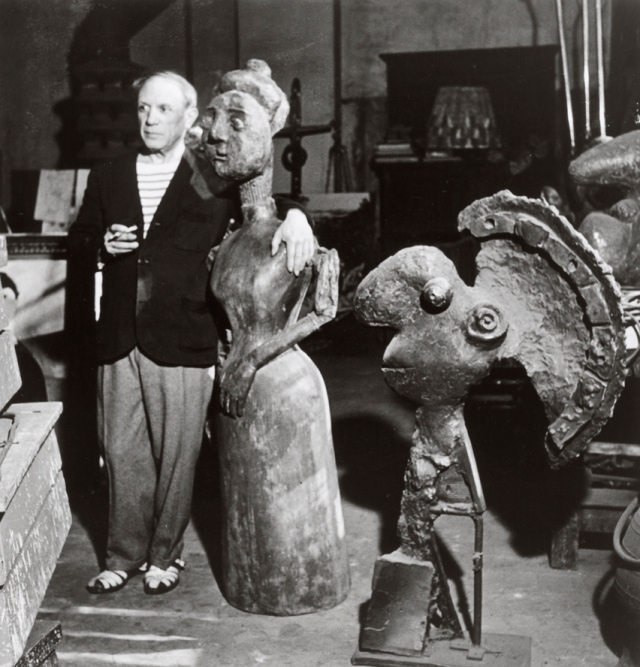 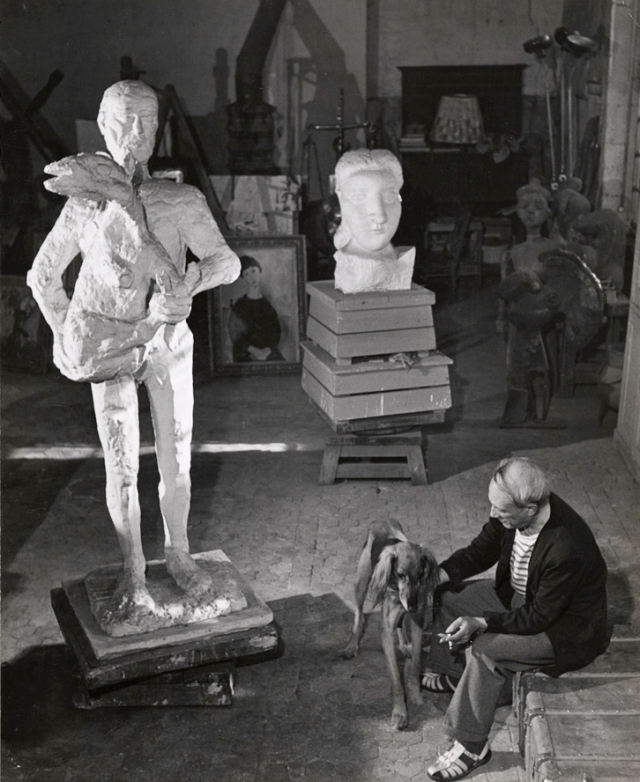 My favorite things in the “staggering” and “once-in-a-lifetime” (NY Times) “Picasso Sculpture” exhibition at The Museum of Modern Art are the photos, by Brassaï, of the sculpture. (“He lived among great jumbles of them from the 1930s on, as attested by the photographs that Brassai took in the artist’s studios between 1932 and 1945. Two dozen Brassaï images line a small gallery here, adding to the show’s ricocheting cross-references and insights.” Roberta Smith, NY Times September 10, 2015.) Although the photos are presented as an appendage, a side dish, or perhaps condiment, I see them as the (vegetarian) meat, the peanut butter and jelly, (the pit of the peach of an exhibition), the entrée of a toothsome exhibition. (Not to be too negative, but I’m positive that the opposite is true for this post, the not insightful, insignificant and ignore-able word pictures are sandwiched between the profound photos.) Every day was a salad day for Pablo Picasso (1881-1973).

This post presents a few more pieces of the photogenic Picasso pie; here are more insightful photos, like the cherries on the top of sundaes, of Picasso posing, clowning, living and petting a (real) dog amongst his sculpture, in his Paris studio, Hôtel de Savoie on 7 rue des Grands Augustins. I prefer the photos of the sculpture because the studio environment is not artificial (and nor perhaps superficial), seeing the sculpture in Picasso’s studio might have been “staggering” and “once-in-a-lifetime.” In the studio the sculpture is the stuff you can live with; they are pictured next to and made from “all kinds of junk;” they are the stuff you can put your arm around and “have fun with.” 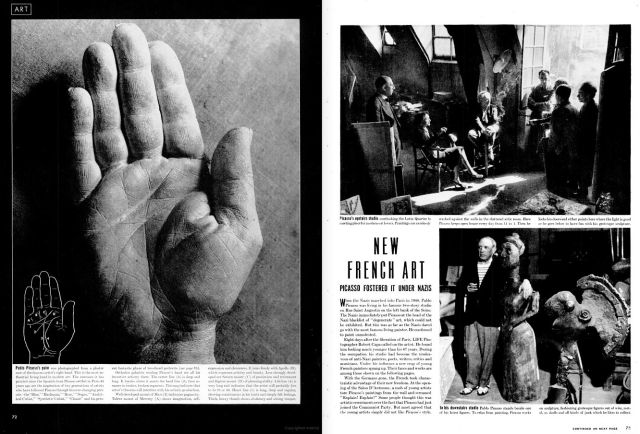 New French Art
Picasso Fostered it Under Nazis
…Eight days after the liberation of Paris, LIFE photographer Robert Capa called on the artist. He found him looking much younger than his 67 years. During the occupation his studio had become the rendezvous of anti-Nazi painters, poets, writers, critics and musicians. Under his influence a new crop of young French painters sprang up. Their faces and works are among those shown on the following pages…
Picasso’s upstairs studio overlooking the Latin Quarter is a meeting place for modern-at lovers. Paintings are carelessly stacked against the walls in the cluttered attic room. Here Picasso keeps open house every day from 11 to 1. Then he locks his doors and either paints here where the light is good or he goes below to have fun with his grotesque sculpture…
In his downstairs studio Pablo Picasso stands beside one of his latest figures. To relax from painting, Picasso works on sculpture, fashioning grotesque figures out of wire, metal, ox skulls and all kinds of junk which he likes to collect.
LIFE, November 13, 1944 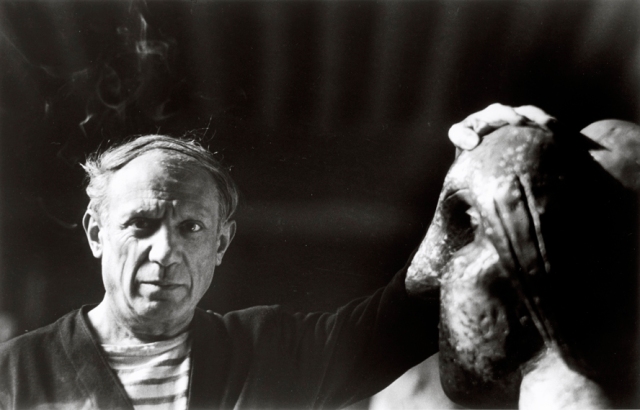 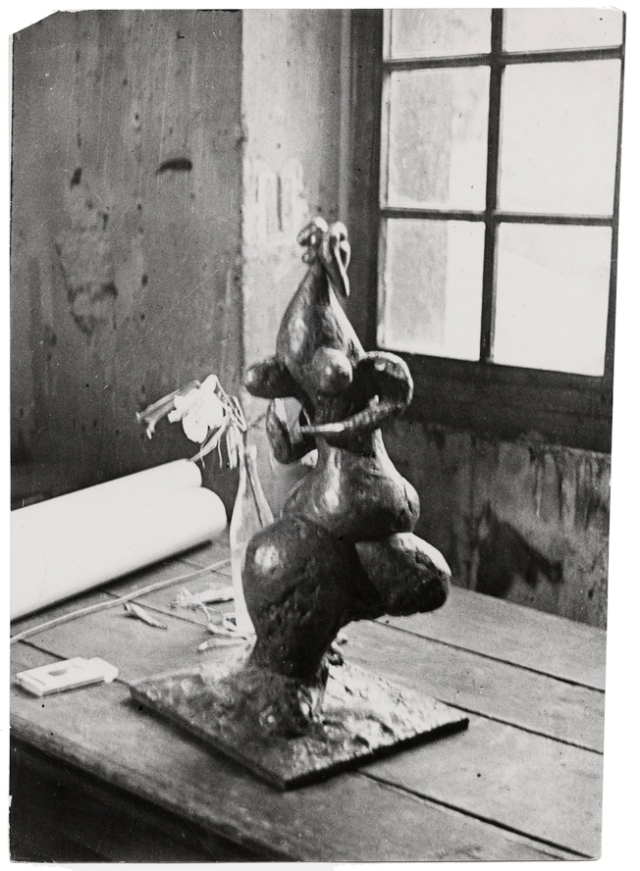 2 Responses to Studio Visit: “Death’s Head” or “Then he locks his doors and either paints here where the light is good or he goes below to have fun with his grotesque sculpture.”