Posted on October 21, 2015 by Christopher George 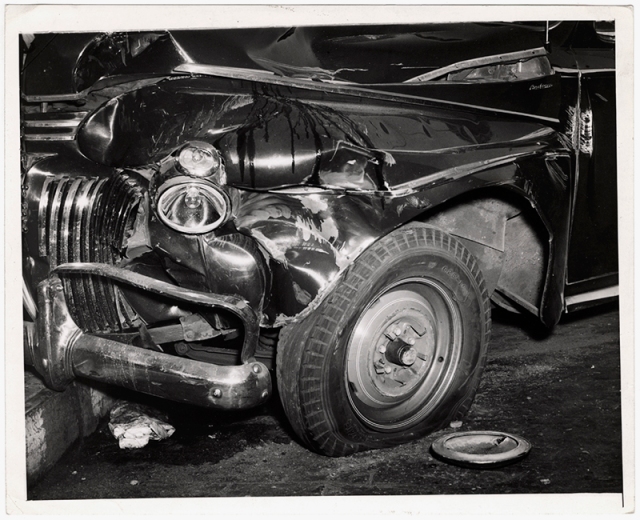 In the 1940s PM campaigned tirelessly (small pun) for automobile (and consumer, labor and every kind of) safety. And Weegee, a person who spent a fair amount of his time in his maroon 1938 Chevy, sometimes listening to “New York’s favorite egghead radio station WQXR. (The WQXR listeners read the New York Post, smoke filter tipped cigarettes, and like guitar music.”) Weegee by Weegee, p.84, and/or a police radio, often provided photos of some of the Naked City’s most dangerous streets. The photos were at times enhanced by PM‘s great art department.

Chief Danger Point on Henry Hudson Parkway Is at 72d St. Entrance
Since March 30 last year ten cars have crashed into light poles or the guard rail (shown in photograph left) with a toll of four dead, 19 injured. Police say that no correctable driving hazard exists at this point, contend that a reasonable amount of caution on the part of motorists would have averted the accidents.
The Park Department, however, which was responsible for designing and construction of the parkway, is now making a study of this situation.
Curious facts about these crashes:
None has involved a collision of cars.
In all cases but one (a blowout), car was southbound.
In all cases but two (driver treated for alcoholism in one), accidents occurred between midnight and 6 a.m., when traffic on the parkway is lightest. PM, July 21, 1940, p. 10

In the Spring of 1941, perhaps as a result of PMs‘ words and images, this deadly stretch of parkway was improved and made safer. PM, never shy to give itself credit for righting a wrong and making the world a better place to live, (from the original Prospectus of PM: We are against people who push other people around, whether they flourish in this country or abroad. We are against fraud and deceit and greed, and cruelty and we will seek to expose their practitioners. We are for people who are kindly and courageous and honest…”) re-published the page from July 21, 1940 (with a new photo by Martin Harris) on March 14, 1941:

Death Used to Ride This Curve
Seven months ago, on July 21, PM portrayed in story and pictures, reproduced at left, the auto death trap at the 72nd Street entrance to the Henry Hudson Parkway. Experts couldn’t explain why accidents occurred at that particular spot but the statistics for 1940 added up to this: seven accidents, two killed, ten injured.
A study of the accidents showered that almost all involved southbound cars making the slight curve to the West Side elevated highway, none were collisions, and most occurred between midnight and 6 a.m., when light traffic invites speeding.
The cars involved crashed into the high curb that divided the lanes or into electric light stanchions; often-until it was removed-into a police booth.
With these curious facts to work on, engineers of the Park Department recently undertook to remove the hazard. After extensive study, they installed heavy guard rails and softened the curb.
The death curve as it looks today is shown above. The work was completed on Feb. 18, two weeks ago. There have been no accidents since, but only time will tell whether the curious problem has been solved. PM, March 14, 1941, p. 12

This softened curb was significant to Weegee who wrote:

“I also hated automobile accidents, but about those I did something. There was a real death trap on the West Side Highway at Seventy-second St.
Cars would hit the abutments, and some would come crashing down into the streets below. I made a series of pictures of the accidents there, and the newspaper PM ran a whole page and started a campaign. Finally, the city put red lights on the unmarked abutments, and the accidents stopped. This work I consider my memorial.
Weegee by Weegee, 1961, pp. 67-68

In the fall of 1941 PM highlighted a deadly part of the West Side Highway… (See post below.)

And in the winter of 1942 PM turned it’s attention to East 155th Street, (before another of Robert Moses’ creations, the Franklin D. Roosevelt East River Drive reached 155th St.).

1. At 5:10 yesterday morning, an automobile, traveling 50 m.p.h., plunged straight along the dotted line into the Harlem River. It should have turned right, following the arrow. There are no signs at this 155th St. corner to tell drivers to turn. Until yesterday afternoon, firemen failed to find the car by dragging the river. Police boats had similar bad luck most of the day. They called for expert help…

3. At 9 last night, the car, a shiny, black Buick, with Rhode Island license plates, was hoisted out of the river by a tug. Body of a Negro (feet are visible) was found in the car. Police Sgt. William Wilson eyewitnessed accident. PM, February 24, 1942, p. 3

It’s a lovely evening… the full moon is out. A car somehow or other drives off the pier into the river. The couples in the parked cars in “Lovers’ Lane,” as the pier is called, run out of the cars dressed in pajamas. Police boats arrive with powerful searchlights which illuminate the waters as other cops try to get a “bite” on the car. It is a long trying job to locate the car in the river. Weegee, Naked City, 1945, p.88

Fortunately there were fewer people killed by cars in 2009 than in any of the previous 100 years:

And the wondrous car-free Broadway in near-by Times Square has become permanent! Or as permanent as anything in the Naked City…

This post, perhaps relevant after the previous post, “…the whole machine was reduced to this crumpled mass”, was composed over five years ago, before Vision Zero and the daily pothole, and when Times Square was near-by. In 2014 there were 257 traffic fatalities and 51,039 traffic injuries in New York City.