Weegee Wednesday: 74 Years Ago Today “… the whole machine was reduced to this crumpled mass.”

Posted on October 14, 2015 by Christopher George

32 People Have Died on This West Side Highway Curve
There’s a murderous curve on the West Side Highway at Little W. 12th St., that has claimed the lives of 32 motorists since the drive was finished in 1930.
Three have died in crashes on this sharp-angled turn in the last three days, two Saturday night, another last night. Two others are in critical condition in hospitals. Police who patrol the section say it is the wickedest spot for an automobile driver in or around New York. A rule-straight stretch approaches it and it looms up without warning. Maybe the latest death toll will spur city authorities to some action toward eliminating the danger, either by banking or rounding off the vicious twist.
Joseph J. Donovan, 51. Brooklyn, was last night’s victim. He was a passenger in a car driven by Cornelius Murphy, 38. Missing the turn, the machine smashed into the concrete island, hit a pole and ended up against the retaining wall. Donovan was killed instantly. Murphy is in St. Vincent’s hospital under a charge of motor-vehicle homicide. He has a possible skull fracture.
Of three men in a car, which took an almost identical course to disaster Saturday night, two were killed and a third is in a hospital. Little hope is held for his recovery. PM, October 14, 1941, Vol. 2, No. 85, p. 15 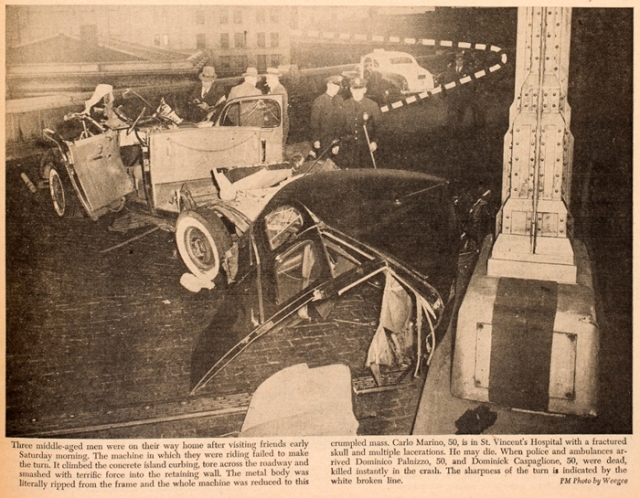 Three middle-aged men were on their way home after visiting friends early Saturday morning. The machine in which they were riding failed to make the turn. It climbed the concrete island curbing, tore across the roadway and smashed with terrific force into the retaining wall. the metal body was literally ripped from the frame and the whole machine was reduced to this crumpled mass. Carlo Marino, is in St. Vincent’s Hospital with a fractured skull and multiple lacerations. He may die. When police and ambulances arrived Dominico Palnizzo, 50, and Dominick Caspaglione, 50, were dead, killed instantly in the crash. The sharpness of the turn is indicated by the white broken lines. PM Photo by Weegee. PM, October 14, 1941, Vol. 2, No. 85, p. 15,

1 Response to Weegee Wednesday: 74 Years Ago Today “… the whole machine was reduced to this crumpled mass.”