Weegee Wednesdays: “The city looks strange to me with the sunlight and people going to work” 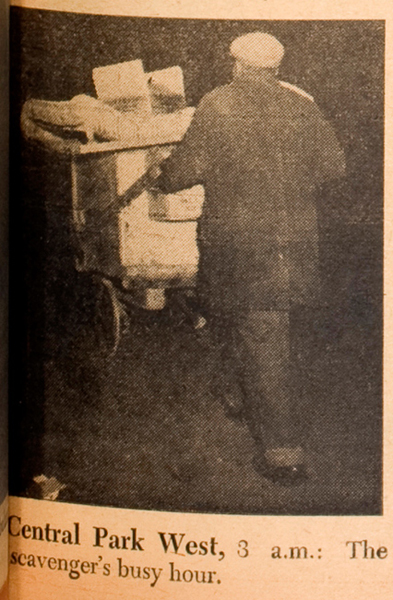 Times Square, 4 a.m.: “What’s the gag?” asked Weegee. It was no gag. They had been to a party and decided to pipe their way to the subway. They wanted to take Weegee to a bar for a nightcap. He passed. 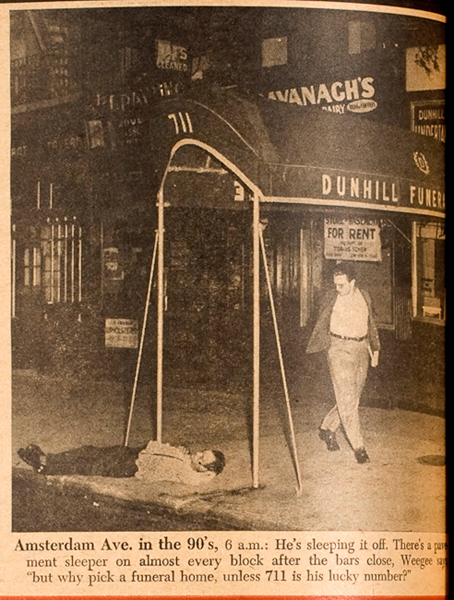 The Early Hours Bring Their Own Cycle of Events

The pictures on these pages were made on the streets of New York – after midnight. They were taken by Weegee, a free-lance photographer who sleeps by day and cruises the city in his car by night, a camera on the seat beside him, the police radio turned on full blast under his dashboard.
The New York that Weegee photographs is a city of gruesome, comic and tragic happenings. Some of these happenings Weegee comes upon by chance; others he finds when a radio alarm directs him to the scene of one of the after-midnight accidents, robberies, suicides and fires that are regular fare for the Police Department.
Weegee starts out at midnight, when the police alarms start coming in steadily over his radio. He’s often at the scene of a crime or accident before the police.
The signals that come over the radio, hour by hour, from midnight to dawn, Weegee says, form a regular pattern:

From midnight to 1 a.m.: Peeping Toms are reported at the windows of nurses’ homes and hotels: the younger hoodlums break into candy, food and auto supply stores.

From 1 a.m. to 2 a.m.: People see (or think they see) mysterious faces on fire escapes and report that burglars are prowling. Most people think they see, Weegee says. The prowlers are usually late home-comers, trying to sneak into bed.

From 2 a.m. to 3 a.m.: Delicatessen stores are burglarized.

At 5 a.m.: Street lights are turned out. The next hour, says Weegee, is the hour of awful automobile accidents.

Around 6 in the morning, most suicides jump from windows. Weegee thinks they choose that hour “because it’s the time of a person’s lowest resistance if they’ve been brooding.”

Just when most New Yorkers are leaving for work, Weegee starts for home and bed. “The city looks strange to me with the sunlight and people going to work,” he says. To these people – office workers, laborers, business men and women – the city that Weegee photographs probably would seem as strange as their day-time does to him.

‘SIESTA’
I wanted to get a good drunk picture… I was doing a series for PM on New york street scenes.. But I didn’t want just a picture of bums in hallways… I wanted something different… after roaming the streets for 6 months.. I came across this scene one Sunday morning on Amsterdam Ave… (Typed caption on the verso of 2267.1993)

It was now almost six in the morning… it is still dark… but the church is open… and the early worshipers find solace inside… except for this tired Sunday traveler who, a few blocks away, finds a resting place underneath the canopy at number 711 Amsterdam Avenue… This avenue is full of saloons, and they are called just that… no fancy foreign names like Cocktail Lounges… So sleep on stranger… no one will bother you… not even the cops… Sunday is a good day for sleeping – so is any other day – when one is tired. Naked City, p. 19

This entry was posted in Fans in a Flashbulb and tagged 1941, Amsterdam Avenue, New York City, PM, Weegee, Weegee Wednesday. Bookmark the permalink.