“I am a soldier of the ideal”: 72 Years Ago Today Anti-Fascist Carlo Tresca Was Assassinated

Posted on January 11, 2015 by Christopher George 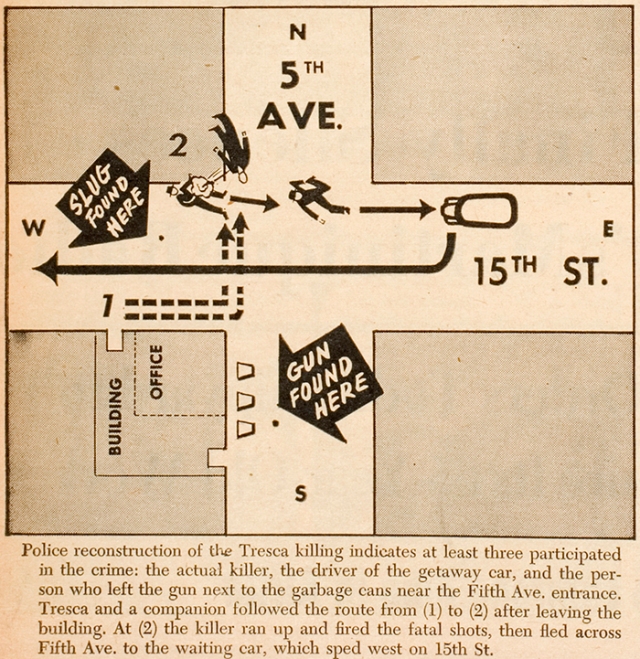 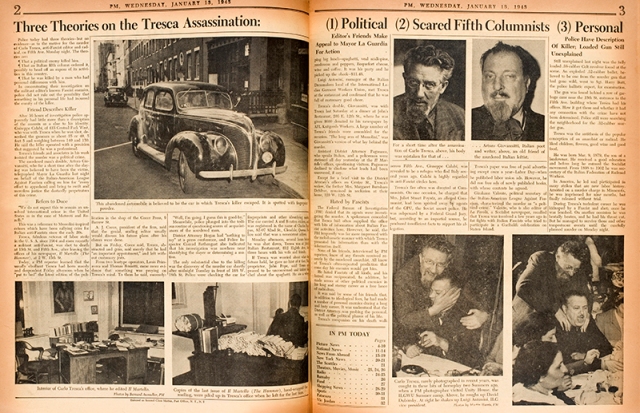 Three Theories on the Tresca Assassination:
Police today had three theories – but no evidence – as to the motive for the murder of Carlo Tresca, anti-fascist editor and radical, on Fifth Ave. Monday night The theories are:
1. That a political enemy killed him.
2. That an Italian fifth column ordered it, possibly to head off an expose of its activities in this country.
3. That he was killed by a man who had personal difference with him.

Photo captions, p. 2:
This abandoned automobile is believed to be the car in which Tresca’s killer escaped. It is sprinkled with fingerprint powder.
Interior of Carlo Tresca’s office, where he edited Il Martello.
Copies of the last issue of Il Martello (The Hammer), hand-wrapped for mailing, were piled up in Tresca’s office when he left for the last time. Photos by Bernie Aumuller, PM.
Photo captions, p. 3:
For a short time after the assassination of Carlo Tresca, above, his body was mistaken for… Arturo Giovannitti, Italian poet and writer, above, an old friend of the murdered Italian leftist.
Carlo Tresca, rarely photographed in recent years, was caught in these bits of horseplay two Summers ago, when a PM photographer visited Unity House, the ILGWU Summer camp. Above he roughs up David Dubinsky. At right he shakes up Luigi Antonini, ILG vice president. Photos by Martin Harris, PM.

PM Daily, January 14, 1943, p. 2
Tresca Probe Indicates Ambush by Murder Mob
Carlo Tresca, veteran radical and anti-fascist editor was murdered Monday night in an elaborate, carefully planned ambush, police now believe. He had not a ghost of a chance to escape the bullets of the assassins waiting for him.
Police emphasized these points:
1. Two bullets from a .32-caliber pistol fired into his back and face killed Tresca.
2. Another slug, badly mashed from ricocheting, was found near the body.
3. An unfired .38-caliber revolver was found near the scene, indicating that a second gunman was lurking nearby.
4. The getaway car had motor running and a driver waiting at the wheel.
That indicates that at least three, and maybe more, were in the murder mob. The slaying had all the appearances of a “professional” crime with hired killers.

PM Daily, January 15, 1943, p. 2
Tresca Planned Return to Italy To Lead a People’s Revolution After War Had Chased Il Duce
Carlo Tresca, veteran radical and anti-Fascist editor of Il Martello (The Hammer), shortly before his murder had discussed with his associated plans to return to Italy after the fall of Mussolini to work for the establishment of a people’s postwar Government there.
That was learned yesterday while police and District Attorney Hogan were continuing their inquiry into the slaying Monday night. Tresca was shot and kiled across the street from his offices at 2 W. 15th St.
The re-shaping of Italy, Tresca said, would be: “Not for the King, not for Mussolini, not for the Pope, but for the working man.”

PM Daily, January 17, 1943, pp. 4-5
Tresca Funeral Cortege Passes Scene of Murder…
Funeral cortege of Carlo Tresca, assassinated anti-Fascist, took a route to bring it past the corner where he was murdered. Large crowds were waiting there. Photo is from Tresca’s office widow.
Exact spot where Tresca died was marked with flowers as the funeral cortege passed 15th St. and Fifth Ave. Shot by an unidentified gunman, Tresca died almost at once. Photos by John DeBiase, PM.

3500 Mourners at Services for Assassin Victim
Luigi Antonini, president of the Italian Labor Council, delivers a eulogy over the body of Carlo Tresca, murdered anti-Fascist.
Arturo Giovannitti, poet, passes casket containing friend’s body.
Here are some of the 2500 who got inside Manhattan Center. Another 1000 stood outside. PM Photos by Irving Haberman.

Carlo Tresca (1879-1943), radical, anti-fascist, anti-Communist, “anarchist,” journalist, editor (of Il Martello, The Hammer), and labor organizer, was shot, across the street from his office, 2 West 15th Street at the corner of Fifth Avenue and 15th Street at 9:40 PM on January 11, 1943. Tresca, an extremist full of contradictions and many enemies, a radicals’ radical, described by the New York Times in 1943 as a “Militant Anti-Fascist Leader” and an “internationally known revolutionary syndicalist writer, militant leader of Italian anti-Fascists and colorful figure in American radical circles for more than a generation.”
Carmine Galante was arrested (while exiting a gambling den that operated behind a candy store on Elizabeth Street) for the murder but never prosecuted (although he was executed in 1979). The crime remains unsolved.

From Carlo Tresca: The Dilemma of an Anti-Communist Radical, by Gerald Meyer, published in Public Affairs Magazine:

Carlo Tresca (1879-1943) is best remembered as a labor agitator and journalist who played a major role in the pre-World War I labor uprisings in Pennsylvania’s coalfields, in Paterson, New Jersey, on Minnesota’s Mesabi Range, and elsewhere. Less well known is Tresca’s courageous and effective leadership in the anti-Fascist struggle within the Italian American community. As an organizer and a journalist, Tresca fought in the front trenches of the fiercest battles of class struggle in the United States. Repeatedly, Tresca came face-to-face with the country’s elaborate and unrelenting repressive apparatus−and sometimes won.

Carlo Tresca, Portrait of a Rebel, by Nunzio Pernicone, published in 2010 by AK Press, PDF