Posted on November 24, 2014 by Christopher George 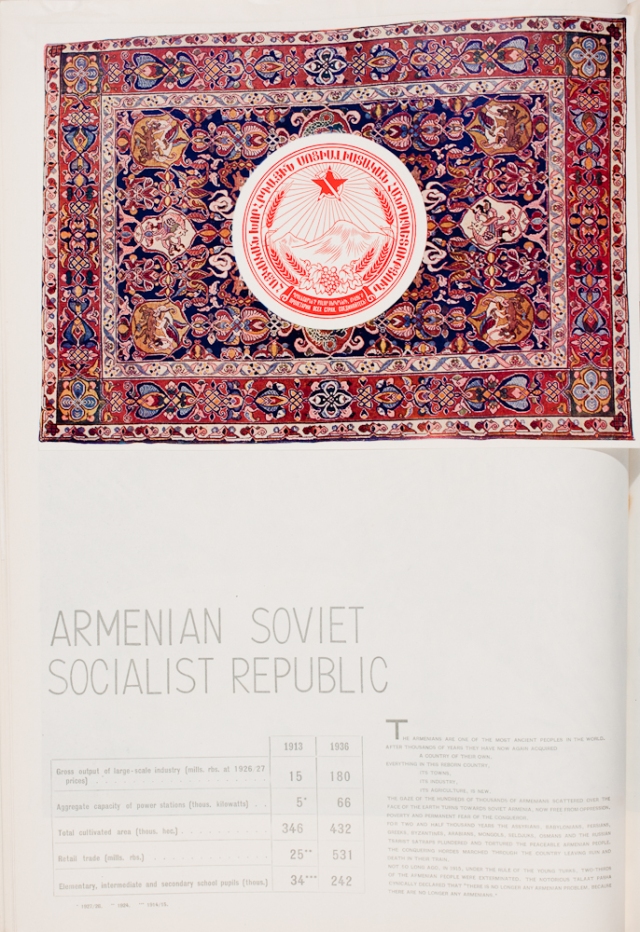 The Armenians are one of the most ancient peoples in the world. After thousands of years they have now again acquired
A country of their own.
Everything in this reborn country,
Its towns,
Its industry,
Its agriculture, is new.
The gaze of hundreds of thousands of Armenians scattered over the face of the earth turns toward Soviet Armenia, now free from oppression, poverty and permanent fear of the conqueror.
For two and half thousand years the Assyrians, Babylonians, Persians, Greeks, Byzantines, Arabians, Mongols, Seldjuks, Osmans and the Russian Tsarist Satraps plundered and tortured the peaceable Armenian people. The conquering hordes marched through the country leaving ruin and death in their train.
Not so long ago, in 1915, [a chronology is here] under the rule of the Young Turks, two-thirds of the Armenian people were exterminated. The notorious [Mehmet] Talaat Pasha [(1874-1921)] cynically declared that “There is no longer any Armenian problem, because there are no longer any Armenians.” 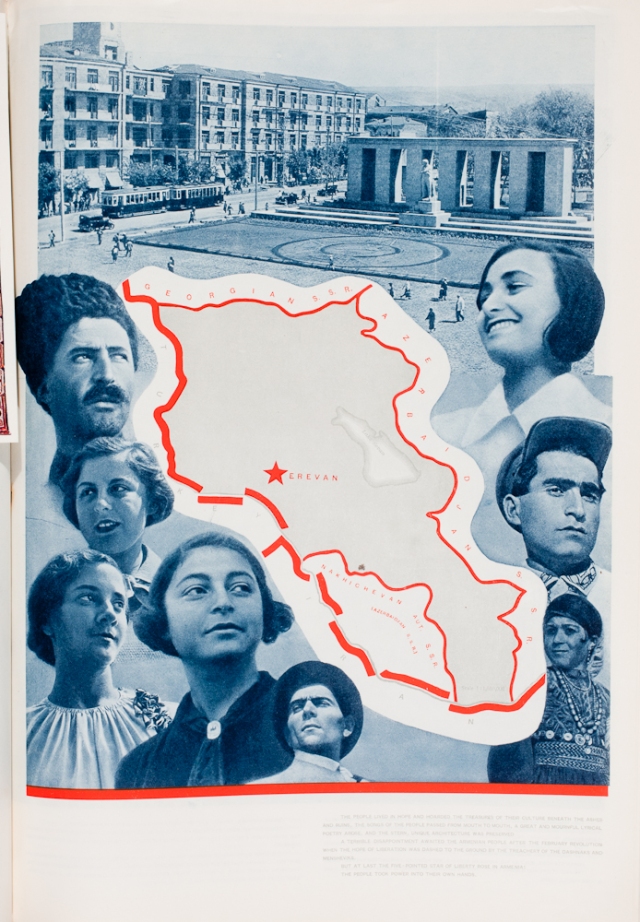 The people lived in hope and hoarded the treasures of their culture beneath the ashes and ruins, the songs of the people passed from mouth to mouth, a great and mournful lyrical poetry arose, and the stern, unique architecture was preserved.
A terrible disappointment awaited the Armenian people after the February Revolution when the hope of liberation was dashed to the ground by the treachery of the Dashnaks and Mensheviks.
But at last the five-pointed star of liberty rose in Armenia.
The people took power into their own hands.

They possessed all that was needed to lead the country to happiness: the enthusiasm of the Bolshevik Revolutionaries, an ancient culture, inexhaustible energy, and the industry of the peasants.
The young country rose like a giant.
Her industry has increased twelve-fold.
Power stations, built by the Armenian workers, are providing current for the factories.
The arid steppe and burning desert, now intersected by numerous irrigation canals, have become fertile lands.
Where once was desert, cotton plantations an vineyards now bloom.
Construction work was begun on a large scale. The first hydro-electrical station of the Sevan-Zangin cascade, Kanakir [Kanaker], the largest power station in Armenia, is already supplying current.
The basic industries of Armenia today are the non-ferrous metals and the chemical industries, chemical plants are already operating in Kirovakan [Vanadzor], Alaverdi and Erevan [Yerevan] while the synthetic rubber plant in Erevan [Yerevan], where production will be carried on by a new method adopted by Soviet scientists, is about to be started.

Copper smelting in Alaverdi and Kefan [Kapan], spinning and weaving, fruit and vegetable canning and the production of building materials, of which Tufa and marble are well known, are combined in Soviet Armenia with rich agriculture.
Soviet culture and art have blossomed forth in the new republic.
In a country where formerly there was not a single higher educational establishment there are now nine technical schools and universities. A new university [Yerevan State University] is being built in Erevan [Yerevan] as well as young pioneer house, a theater and a central library [National Library of Armenia]. Scores of new schools, hospitals and creches are springing up everywhere.
The history of Armenia during the past few years is a striking illustration of Lenin’s and Stalin’s national policy in practice. 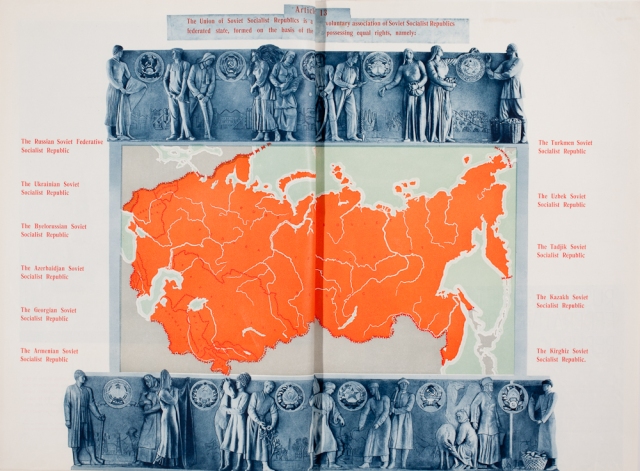 On the title page is printed: “Paper, colours and printing by Goznak.” Presumably this is the same Gaznak that was founded in 1818 and currently prints bank notes, passports, postage stamps, and manufactures coins (and perhaps even “credit cards, banking cards, phone cards, and SIM chips”).

A single issue cost 35 cents, subscriptions could be had for $2 for 6 months and $4 for a year.

The North and South American office for subscription orders was at Bookniga Corporation, 255 Fifth Ave., (the ground floor is currently a steakhouse although next to a Russian gift shop) New York, N.Y.

When I initially read this issue of USSR in Construction my knee jerk reaction was something like: the national policy and practice in 1937 of Lenin’s and Stalin’s Soviet Union recognized that in 1915 “two-thirds of the Armenian people were exterminated” and yet in 2014 the Turkish government does not acknowledge that the deaths of over 1.5 million people was genocide. Or, as Robert Fisk wrote in the Independent earlier this year: “The facts of the Armenian Holocaust are as clear and real as those of the later Jewish Holocaust. But they must be repeated because the state of Turkey remains a holocaust denier, still insisting that the Ottoman government did not indulge in the genocide which destroyed a million and a half of its Armenian Christian population almost a century ago.”