Posted on April 3, 2014 by fansinaflashbulb

Harry Callahan only had eyes for one woman—her name was Eleanor Knapp. They met in 1933 when she saw a picture of him and proposed a date; two years later they were married. For the next six decades she would be his mistress and his muse. Photographed “an endless number of ways,” Eleanor was Callahan’s primary subject from 1947 to 1960. 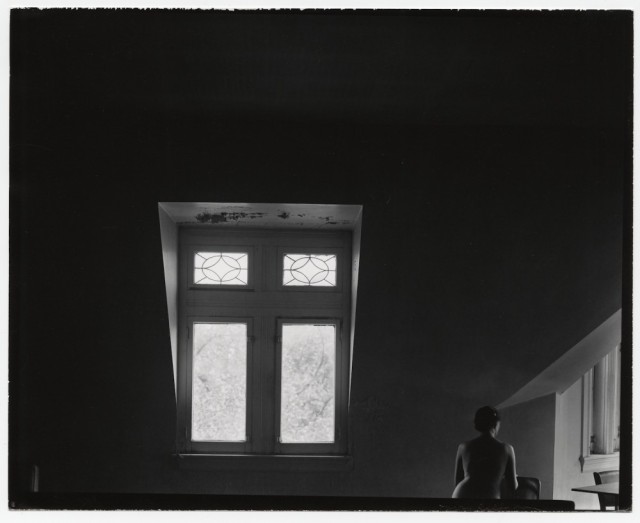 Mainly self-taught, Callahan began photographing in 1938 with the Chrysler Camera Club in Detroit, Michigan. After seeing a lecture by Ansel Adams in 1941, Callahan was inspired to concentrate on his photography more seriously. He would shoot all morning and spend the afternoons printing the day’s best negatives. Photography became a ritualistic affair—a deeply personal one.

While living with Eleanor in Chicago, he invented the 8×10 view camera snapshot. His was casual, yet meticulous. Harry Callahan was like the Atget of Chicago in the 1950s—only it wasn’t the city that captivated him, it was his wife. In their home, on the street, and in nature, Callahan photographed Eleanor in order to possess her. She is ever-present in the photographs—in every form, in every ray of light, there is Eleanor.

Callahan had a unique vision that combined the experimentation of the European Modernism with the grace of the Americans. The photographs selected were made in the couple’s first years in Chicago, before their daughter Barbara was born. With grace, Harry Callahan documents their most intimate moments alone together. He never exhausted of photographing her, and even in his landscapes and abstracted forms, it seems to be Eleanor his loving eye is searching for.

This entry was posted in Fans in a Flashbulb and tagged Harry Callahan, ICP-Bard. Bookmark the permalink.