The American photographer Lee Friedlander is well-known and respected for his documentation of the American social landscape. Though there are many wonderful things to write of Friedlander’s street shots and portraits of jazz icons,  I have always been most interested in his strange brand of self portraiture.

Friedlander’s self portraits are quite different from those of most other photographers; he rarely presents himself in an easily identifiable manner. In these portraits, Friedlander is seen through a reflection, a shadow, or obscured behind an object. A notoriously shy man, he purposefully disguised himself in his photographs and describes the process as “fascinating and disturbing.”

Friedlander’s frequent partial appearance within his photographs is very odd when considering other photographers’ self portraits. Many use self portraits as a way to explore different versions of themselves, as exercises in photographic and conceptual techniques, and in a few cases (at least) as a means to act out their narcissistic tendencies. Lee Friedlander’s reluctant self portraits don’t seem to fall into any one of these categories… 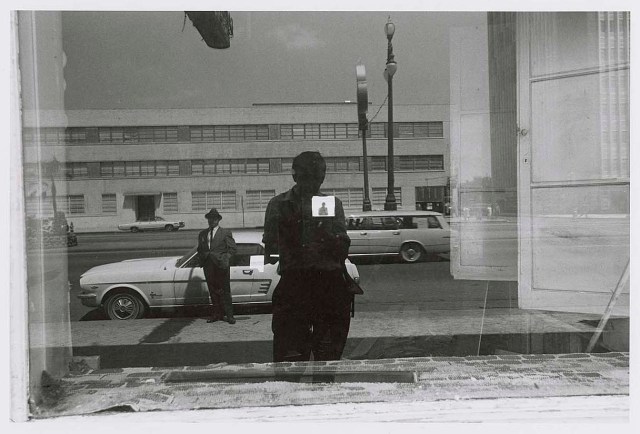 However, Friedlander isn’t the only one who appears to be a bit camera shy. Here are two examples by other artists who have produced similarly cryptic self portraits.

Currently a graduate student at Columbia University, studying Photography Theory, Museum Studies, and Anthropology; I'm slowly learning how to live in and love New York City...
View all posts by kaitlinvaughan →
This entry was posted in Fans in a Flashbulb and tagged Andre Kertesz, Bernard Plossu, Lee Friedlander, self portrait. Bookmark the permalink.