Posted on October 28, 2011 by mariettarklase 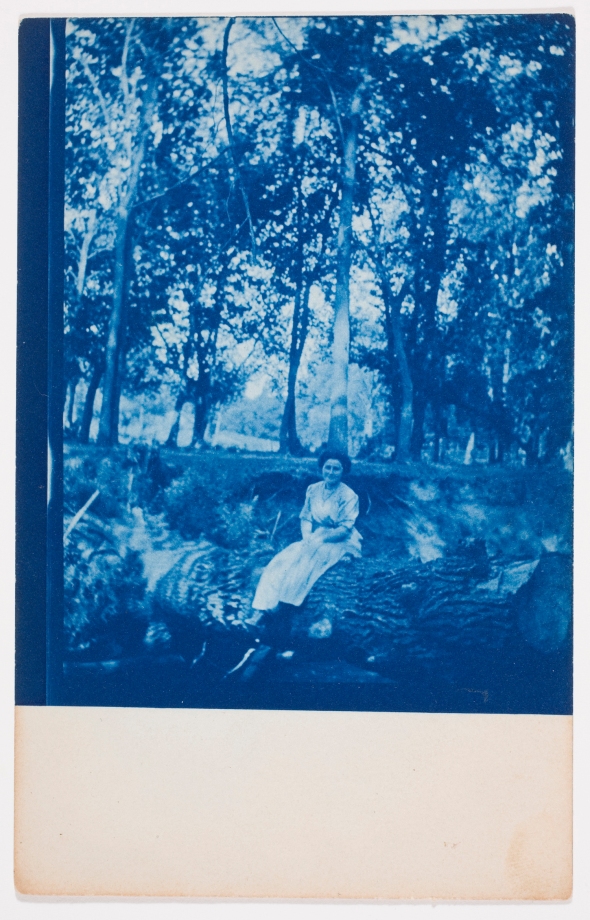 Cyanotypes found favor among amateur photographers of the late-nineteenth and early twentieth centuries for several reasons. The materials to produce cyanotypes were easily accessible and relatively inexpensive. The process was invented in 1842 by the English scientist John Herschel. Herschel had originally developed cyanotypes as a way to duplicate documents like notes or diagrams. He had discovered an iron salt solution that, when applied to a surface and exposed to ultraviolet light, would produce a deep blue hue. After treating a surface with the iron salt solution, Herschel could then place a negative on top, expose it to ultraviolet light, and create a reversed duplicate of the image.

In 1843, the botanist Anna Atkins took Herschel’s discovery and used it to create a series of cyanotype photograms for her book Photographs of British Algae: Cyanotype Impressions. Atkins produced the photograms through contact printing by placing objects directly onto chemically treated paper and then exposing them it in the sun, creating a silhouette of the object. The book propelled the cyanotype into the realm of photography by providing greater exposure of the medium. The process soon became popular with amateur photographers after commercial papers such as blue print paper (including these postcard-sized papers) were mass produced.

This entry was posted in Fans in a Flashbulb and tagged Anna Atkins, cyanotype, John Herschel, postcard, unidentified photographer. Bookmark the permalink.