Posted on June 1, 2011 by Christopher George

“Guest From London Shot With Pop Art Movie Man.
Shot in attack on underground movie producer Andy Warhol, London art gallery owner Mario Amaya, about 30, walks to ambulance. Warhol was shot and critically wounded by one of his female stars, Valerie Solanas, 28, the “Girl on the Staircase” in one of his recent films. She walked into Andy’s sixth floor office at 33 Union Square West late yesterday afternoon and got off at least five shots. Valerie later surrendered…

Andy Warhol Wounded by Actress.
He’s on Critical List; She Gives Up to Cop
Andy Warhol, 36-year-old pop artist, maker of underground movies and darling of the avant-garde set, was critically wounded at 4:30 p.m. yesterday when one of his female film stars barged into his sixth-floor Union Square office and, without a word, fired a barrage of bullets at Warhol and a business associate.
Of the four shots fired at close range, one .32 caliber bullet hit Warhol and another inflicted a relatively minor wound on the associate.
Warhol underwent five and a half hours of emergency surgery by a team of four doctors at Columbus Hospital. He was given a “50-50 chance to live.”
The suspect Valarie Solanas, 28, surrendered to rookie Patrolman William Schmalix, on traffic duty at Seventh Ave. and 47th St. at 7:30 p.m.
Schmalix, 22, and a cop only since February, said she handed him a .22 revolver and a .32 automatic and told him: “The police are looking for me. I am a flower child. He had too much control over my life.”

Refuses to give address.

Booked at the E. 21 St. station on charges of felonious assault and possession of a dangerous weapon with intent to kill, the short haired blonde declared that she lived “nowhere.”
When asked who she really was, she replied: “I’m really a writer,” and said she was a 1962 University of Maryland graduate. Asked to explain the shooting, she stated: “There are many involved reasons. I have written a manifesto of what I am and what I stand for.”
The bullet that hit Warhol twisted crazily through his abdomen and chest, wrecking much damage. It entered through the left lung, hit his spleen, stomach and liver and esophagus penetrating the right lung and emerging from his right side. X-rays established that only one slug had caused the damage…

Alarm Out for Actress.

Police had put out an alarm for the short, thin actress, whose last known address was the Chelsea Hotel, 222 W. 23d St. between Seventh and Eighth Aves. It is an old time literary and artistic hangout that was the locale of “The Chelsea Girls,” one of Warhol’s most famous films.
Miss Solanas, who starred as the “Girl on the Staircase” in another famous Warhol flick, “I, a Man,” was roundly denounced by Warhol friends who gathered in a hospital’s waiting room with Warhol’s mother, Julia…
An actress known as Viva, who was comforting Warhol’s babushka-wearing mother, insisted calmly: “He isn’t going to die.”
Viva said she had been talking with Warhol by phone when he was shot. “I heard five shots and a lot of screaming,” Viva related. “I heard Andy screaming. I thought it was a joke, then the phone was dropped.” 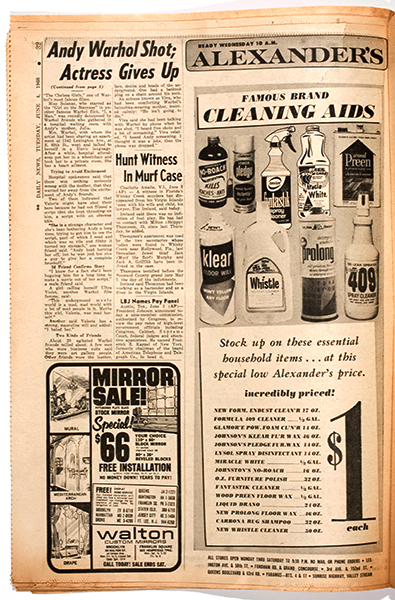 This entry was posted in Fans in a Flashbulb and tagged 1968, Andy Warhol, Daily News. Bookmark the permalink.