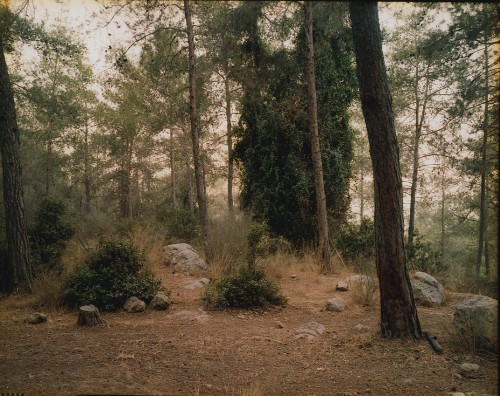 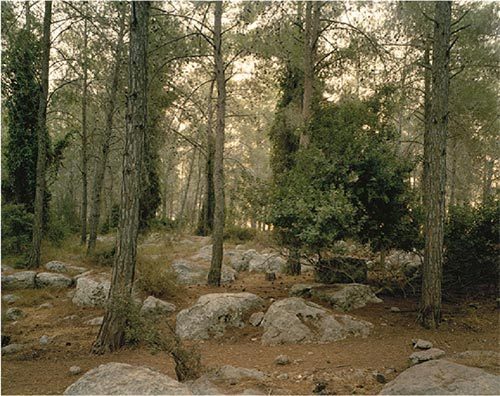 Photographers Adam Broomberg and Oliver Chanarin recently donated the two works above, which were included in Ecotopia: The Second ICP Triennial of Photography and Video:

Since the founding of Israel in 1948, more than ten million pine trees have been planted within the country’s shifting borders. This ongoing endeavor is largely overseen by the Jewish National Fund, which secures donations for saplings from around the world, organizes planting excursions for tourists, and often incorporates this green gesture into state visits by foreign dignitaries. Though many of the trees are planted as personal memorials to loved ones, the expansion of Israeli forests is broadly promoted with the slogan, “Making the desert bloom,” an ostensibly ecological phrase that also functions as a metaphor for revitalized Israeli identity in the modern era.

Adam Broomberg and Oliver Chanarin have explored this general phenomenon in a series of color photographs titled “Forest” (2005). But the specific sites they have chosen to document are former Palestinian villages that were evacuated and destroyed at various times since 1948. Each razed village has since been planted with stands of pine trees that gradually colonize the reclaimed lands and obscure their histories of devastation. That this aspect of Israeli forestation efforts is rarely acknowledged is illustrated by the ongoing debate surrounding Canada Park, a West Bank picnic area that has flourished among the ruins of Imwas and Yalu, two ancient Palestinian villages that were decimated in the Six Day War of 1967. Recent petitions to describe this history in the park’s informational signage have met with resistance.

In light of such events, one is inclined to interpret the depopulation stillness of the “Forest” series as a metaphor for historical erasure, and perhaps read the well-worn paths and rock-strewn grounds as traces of villages that are no longer there. Yet without prior knowledge of these sites, Broomberg and Chanarin’s photographs are rather opaque, and appear to depict a pristine wilderness of old-growth trees that has witnessed little human intervention. While underscoring the influence of contextual information, these ambiguous pictures also challenge our readiness to attribute mostly positive values to the growth and nurture of the natural world.

Director of Exhibitions and Collections at the International Center of Photography, New York
View all posts by erinbarnett →
This entry was posted in Fans in a Flashbulb and tagged Adam Broomberg, ICP Recent Acquisitions, ICP Triennial, Oliver Chanarin. Bookmark the permalink.