After the skeins are taken from the whizzer, they are hung on racks to dry. 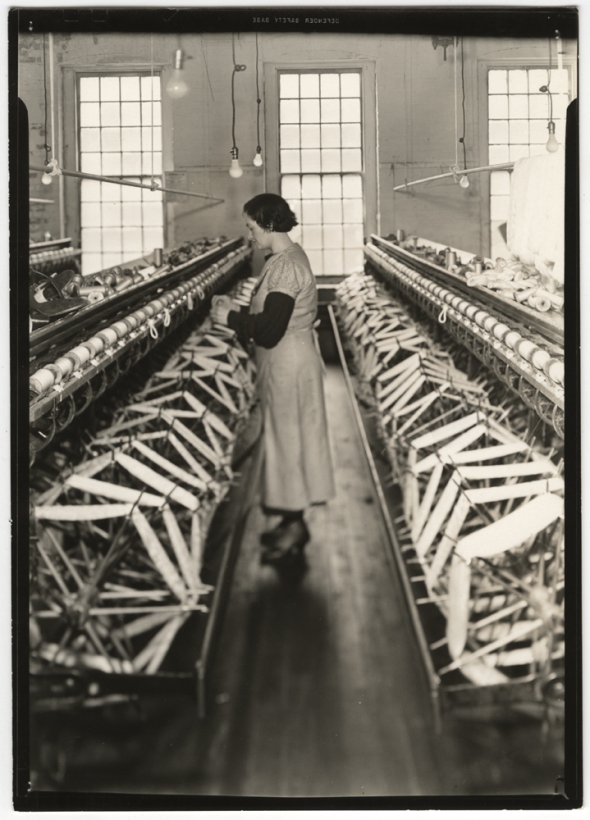 Silk skeins on winding creels or swifts. The yarn is wound from the skein on to bobbins. 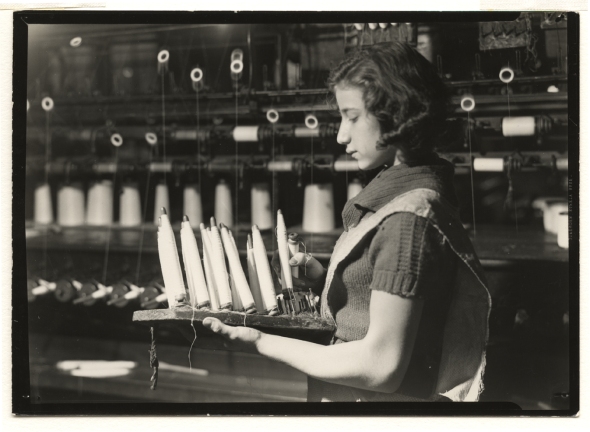 Quiller with rack of full quills which are ready to be inserted in shuttles for weaving.

View of threads going from creel through the reeds and over the roller. Note the use of reeds in bringing threads to converge to a very narrow breadth as they go over the roller.

Born in Oshkosh, Wisconsin in 1874, Lewis Wickes Hine trained as a sociologist. Moving to New York in 1901 to work at the Ethical Culture School, he took up photography to enhance his teaching practices. A few years later, Hine began documenting the arrival of immigrants at Ellis Island. He served as the official photographer of the National Child Labor Committee from 1911 to 1916, using his images to pass child labor laws. Hine continued his exploration of workers, photographing the construction of the Empire State Building, the Tennessee Valley Authority, and the Rural Electrification Administration.

Although he was employed by the Works Progress Administration during the 1930s, Hine did not photograph under the direction of Roy Stryker’s FSA project. Instead, he was selected as the photographic director of the National Research Project of the WPA in late 1936. From December 1936 to July 1937, Hine documented fourteen American industrial communities for the National Research Project on Reemployment Opportunities and Recent Changes in Industrial Techniques. In each town, Hine photographed general views of the community, working conditions in factories, machinery, and workers to investigate recent changes in industrial techniques and evaluate their effects on employment.

Paterson, New Jersey, was an ideal city for the National Research Project’s study. Founded by the Society for the Establishment of Useful Manufactures, Paterson became the cradle of the industrial revolution in America by harnessing energy from the Great Falls to power manufacturing. Known as “Silk City,” Paterson was home to dozens of silk and textile mills as well as firearms and manufacturing industries. When Hine visited in 1936 and 1937, the mills were no longer being powered by the waterfalls, but they were supplying thousands of jobs during a period of economic crisis.

Director of Exhibitions and Collections at the International Center of Photography, New York
View all posts by erinbarnett →
This entry was posted in Fans in a Flashbulb and tagged Lewis Wickes Hine, National Research Project, Paterson, WPA. Bookmark the permalink.