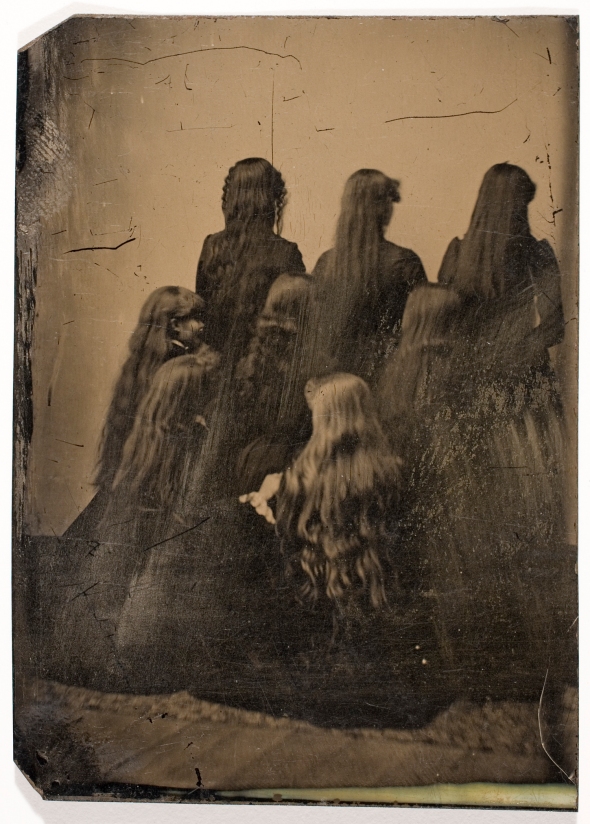 The nineteenth-century obsession with hair was expressed first in jewelry:  brooches, necklaces, earrings, either made with or attached by a lock of hair. Often the lock of hair would symbolize mourning; however, it was also used as a token of love and remembrance for the living. With the mid-century advent of photography and the slightly later development of the tintype, a new expression became available to the general public: the freedom to express oneself with not just the object but with a representation of the object. Combining a tiny photograph or a piece of photo-jewelry with hair, which allowed adornment of the token, became extremely popular.

Furthering this fetish for hair with photography was to highlight the sitter’s hair in portraiture, making the hair the subject. Remarkably similar to the photographs taken of the famous Seven Sutherland Sisters of  Barnum & Bailey fame, this image of eight women with almost as impressively long and healthy hair  illustrates how important hair was to the Victorians. The Seven Sutherland Sisters were famous for their singing performances but ultimately the attraction was their hair, resulting in the development of very popular hair tonics featuring their portraits on the products as evidence of the tonic’s effectiveness.